Men in the Off Hours (Vintage Contemporaries) (Paperback) 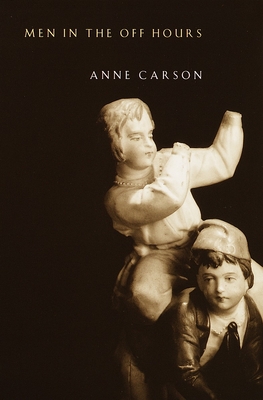 Men in the Off Hours (Vintage Contemporaries) (Paperback)


Not On Our Shelves—Ships in 1-5 Days
Anne Carson has been acclaimed by her peers as the most imaginative poet writing today. In a recent profile, The New York Times Magazine paid tribute to her amazing ability to combine the classical and the modern, the mundane and the surreal, in a body of work that is sure to endure.

In Men in the Off Hours, Carson offers further proof of her tantalizing gifts. Reinventing figures as diverse as Oedipus, Emily Dickinson, and Audubon, Carson sets up startling juxtapositions: Lazarus among video paraphernalia, Virginia Woolf and Thucydides discussing war, Edward Hopper paintings illuminated by St. Augustine. And in a final prose poem, she meditates movingly on the recent death of her mother. With its quiet, acute spirituality and its fearless wit and sensuality, Men in the Off Hours shows us a fiercely individual poet at her best.
ANNE CARSON was born in Canada and has been a professor of Classics for over thirty years. Her awards and honors include the Lannan Award, the Pushcart Prize, the Griffin Trust Award for Excellence in Poetry, and fellowships from the Guggenheim and MacArthur Foundations.
"Carson's reputation has soared to a level equal to that of the half-dozen most admired contemporary American poets."–The New York Times Book Review