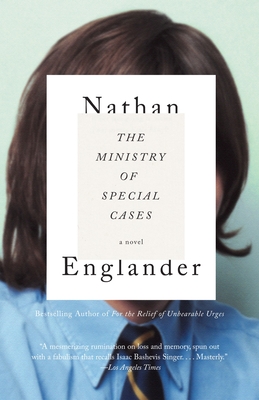 From its unforgettable opening scene in the darkness of a forgotten cemetery in Buenos Aires, the debut novel from the Pulitzer-nominated, bestselling author of For the Relief of Unbearable Urges casts a powerful spell.

In the heart of Argentina's Dirty War, Kaddish Poznan struggles with a son who won't accept him; strives for a wife who forever saves him; and spends his nights protecting the good name of a community that denies his existence. When the nightmare of the disappeared children brings the Poznan family to its knees, they are thrust into the unyielding corridors of the Ministry of Special Cases, a terrifying, byzantine refuge of last resort. Through the devastation of a single family, Englander brilliantly captures the grief of a nation.

Nathan Englander is the author of the novel The Ministry of Special Cases and the story collections For the Relief of Unbearable Urges and What We Talk About When We Talk About Anne Frank, a winner of the Frank O’Connor International Short Story Award, and a finalist for the Pulitzer Prize. He is Distinguished Writer-in-Residence at New York University and lives in Brooklyn, New York, with his wife and daughter.

“Who is this Nathan Englander, so young in novelist years, but already possessed of an old masters voice?... One reads this novel in awe of Englander's talent. —The New York Times Book Review“A mesmerizing rumination on loss and memory.” —Los Angeles Times“[A] tour-de-force…. A few pages into The Ministry of Special Cases, it becomes clear how much [Englander] has to bring to the topic: pitch-black humor, a skeptical affection for his characters, and the narrative ability to trace the impact of fascism-with-a-modern-face on a cluster of lives.” —The Seattle Times