The Last Hero: A Life of Henry Aaron (Hardcover) 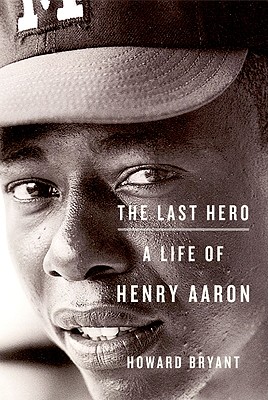 The Last Hero: A Life of Henry Aaron (Hardcover)

In the thirty-four years since his retirement, Henry Aaron’s reputation has only grown in magnitude: he broke existing records (rbis, total bases, extra-base hits) and set new ones (hitting at least thirty home runs per season fifteen times, becoming the first player in history to hammer five hundred home runs and three thousand hits). But his influence extends beyond statistics, and at long last here is the first definitive biography of one of baseball’s immortal figures.

Based on meticulous research and interviews with former teammates, family, two former presidents, and Aaron himself, The Last Hero chronicles Aaron’s childhood in segregated Alabama, his brief stardom in the Negro Leagues, his complicated relationship with celebrity, and his historic rivalry with Willie Mays—all culminating in the defining event of his life: his shattering of Babe Ruth’s all-time home-run record.

Bryant also examines Aaron’s more complex second act: his quest to become an important voice beyond the ball field when his playing days had ended, his rediscovery by a public disillusioned with today’s tainted heroes, and his disappointment that his career home-run record was finally broken by Barry Bonds during the steroid era, baseball’s greatest scandal.

Bryant reveals how Aaron navigated the upheavals of his time—fighting against racism while at the same time benefiting from racial progress—and how he achieved his goal of continuing Jackie Robinson’s mission to obtain full equality for African-Americans, both in baseball and society, while he lived uncomfortably in the public spotlight. Eloquently written, detailed and penetrating, this is a revelatory portrait of a complicated, private man who through sports became an enduring American icon.

Howard Bryant is the author of"Shut Out: A Story of Race and Baseball in Boston, "which was a finalist for the Society for American Baseball Research's 2003 Seymour Medal, and" Juicing the Game: Drugs, Power, and the Fight for the Soul of Major League Baseball. "He is a senior writer for""ESPN.com and" ESPN the Magazine"; appears regularly on ESPN's "The Sports Reporters, ESPN First Take, "and" Outside the Lines"; and serves as sports correspondent for NPR's" Weekend Edition Saturday. "He lives in western Massachusetts.""

"Just when it seemed as if all the great baseball subjects had been done, Howard Bryant checks in with this biography of Henry Aaron…Bryant is a great writer for a great subject…Mr. Aaron's story is the epic baseball tale of the second half of the 20th century."
—Pittsburgh Post-Gazette

“Beautifully written and culturally important…tells the Aaron story with gusto and a ferocious sweep.”
—The Washington Post

"Brawny…The Last Hero had the forceful sweep of a well-struck essay as much as that of a first-rate biography."
—The New York Times

"A must read for baseball fans of every generation."
—Booklist

"One of Howard Bryant’s mentors, the late David Halberstam, encouraged him to ‘bring those great Henry Aaron wrists to life,’ and he has done that and more with this marvelous book. Wrists, legs, heart, brain—here is the full picture of a great man and ballplayer who finally gets his due."
—David Maraniss, author of Clemente

"An eye-opening biography of the Braves’ outfielder, the real home-run king…Baseball’s tainted steroid era has, if anything, bestowed an even brighter shine to Aaron’s on-field achievements, but Bryant makes clear that this slugger’s story was always about more than merely overcoming blazing fastballs. Plenty of baseball for the fan, but even more insight into why Aaron matters beyond the game."
–Kirkus Reviews

"I loved baseball books as a child. This is a baseball book for adults, the story of a gifted, complex man and his struggles in our complex country. This is a fascinating and at times a troubling book, which revivified the lovely old game for me."
–Tracy Kidder, author of Mountains Beyond Mountains

"We already know Henry Aaron as one of the greatest players in the history of baseball.  Now, in Howard Bryant’s impeccably researched and nuanced biography, we know Henry Aaron not just as a great ballplayer, but as a remarkable man. In The Last Hero Bryant asks the hard questions and cuts through the myths to create a timeless and unflinching portrait of an American icon and his times.  And as in any great biography, in learning about Aaron’s life we also learn something about our own."
—Glenn Stout, author of Young Woman and the Sea: How Trudy Ederle Conquered the English Channel and Inspired the World, and Series Editor, The Best American Sports Writing

"No one was more important to the game of baseball in the last half of the 20th Century than Henry Aaron and no one writes about that supremely talented man, that tumultuous time and this treasure of a game better than Howard Bryant. Together, they are an extraordinary combination, and the book Bryant has written gets to the heart of the complicated and dignified, patient and consistent genuine hero that is Henry Aaron."
–Ken Burns, filmmaker

"Not just another book on Hank’s prodigious ability to elevate baseballs over the fences…the postcareer exploits of Aaron will inspire all readers. Bryant evokes the apparently distant world marked by cruel segregation, racism, and poverty of the soul, as well as reliving some of the greatest moments of baseball. A most welcome book, most highly recommended."
–Library Journal

“Bryant makes the most of every minute with Aaron, placing the Brave’s accomplishments on the diamond solidly in the context of the 1954 to 1976 world in which he played.” –Atlanta Magazine, “The Shelf”

“There will surely be other books on Hank; there may never be a better book on Henry Aaron than Bryant’s The Last Hero.” –al.com

“Bryant lets Aaron’s accomplishments speak for themselves in this long-overdue, thoughtful biography that stands as one of the most impressive profiles of a ballplayer in years.” –San Francisco Chronicle

“This book is perfect for the sports fan and the history buff.” –Good Morning America

“A perfect match of subject and writer...The sports book of 2010.” –The Book List

"[Bryant’s] examination of Aaron is the best baseball biography to come along in years, a work that fuses the storytelling acumen of a David Halberstam with the sensitivity for race and sport embodied by writers such as Dave Zirin and William Rhoden…For readers eager to know the man behind the numbers and the footage, Bryant hits one out of the park." –The Bay State Banner

“Bryant lets Aaron’s accomplishments speak for themselves in this thoughtful and long-overdue biography.” –San Francisco Chronicle