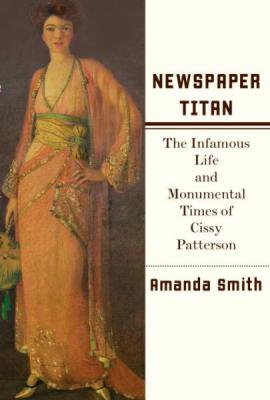 From the author of Hostage to Fortune; The Letters of Joseph P. Kennedy ("Superb" —Michael Beschloss; "Remarkable" —Arthur Schlesinger), the galvanizing story of Eleanor Medill (Cissy) Patterson, celebrated debutante and socialte, scion of the Chicago Tribune empire, and the twentieth century's first woman editor in chief and publisher of a major metropolitan daily newspaper, the Washington Times-Herald.

She was called the most powerful woman in America, surpassing Eleanor Roosevelt, Bess Truman, Clare Boothe Luce, and Dorothy Schiff.

Cissy Patterson was from old Republican stock. Her grandfather was Joseph Medill, firebrand abolitionist, mayor of Chicago, editor in chief and principal owner of the Chicago Tribune, and one of the founders of the Republican Party who delivered the crucial Ohio delegation to Abraham Lincoln at the convention of 1860.

Her pedigree notwithstanding, Cissy Patterson came to publishing shortly before her forty-ninth birthday, in 1930, with almost no practical journalistic or editorial experience and a life out of the pages of Edith Wharton (or more likely the other way around: shades of Cissy are everywhere in the Countess Olenska).

Amanda Smith writes that in the summer of 1930, Cissy Patterson, educated at the turn of the century at Miss Porter's School in Farmington, Connecticut, for a vocation of marriage and motherhood and a place in society, took over William Randolph Hearst's foundering Washington Herald and began to learn what others believed she could never grasp—how to run and build up a newspaper. She vividly lived out the Medill family's editorial motto (at least in spirit): "When you grandmother gets raped, put it on the front page."

Patterson soon bought from Hearst the Herald's evening sister paper, the Washington Times, merged the two, and became editor, publisher, and sole proprietor of a big-city newspaper, a position almost unprecedented in American history. The effect of the merger was "electric"...

By 1945, the Washington Times-Herald, with ten daily editions, was clearing an annual profit of more than $1 million.

Amanda Smith, in this huge, fascinating biography gives us the (infamous) life and monumental times of Cissy Patterson, scourge of liberals, advocate of appeasing Hitler, lover of poodles, and hater of FDR.

Here is her twentieth-century Washington: its politics and society, scandals and feuds, and at the center—the fierce newspaper wars that consumed and drove the country's press titans, as Patterson took the Washington Times-Herald from a chronic tail-ender in circulation and advertising, ranked fifth in the town, and made it into the most widely read round-the-clock daily in the national's capital, deemed by many to be "the damndest newspaper to ever hit the streets."