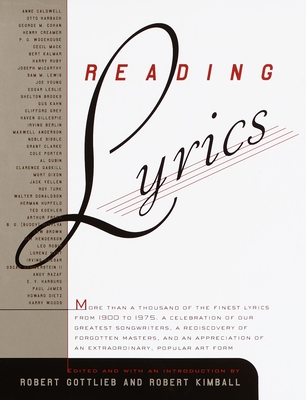 
Special Order—Subject to Availability
A comprehensive anthology bringing together more than one thousand of the best American and English song lyrics of the twentieth century; an extraordinary celebration of a unique art form and an indispensable reference work and history that celebrates one of the twentieth century’s most enduring and cherished legacies.

Reading Lyrics begins with the first masters of the colloquial phrase, including George M. Cohan (“Give My Regards to Broadway”), P. G. Wodehouse (“Till the Clouds Roll By”), and Irving Berlin, whose versatility and career span the period from “Alexander’s Ragtime Band” to “Annie Get Your Gun” and beyond. The Broadway musical emerges as a distinct dramatic form in the 1920s and 1930s, its evolution propelled by a trio of lyricists—Cole Porter, Ira Gershwin, and Lorenz Hart—whose explorations of the psychological and emotional nuances of falling in and out of love have lost none of their wit and sophistication. Their songs, including “Night and Day,” “The Man I Love,” and “Bewitched, Bothered and Bewildered,” have become standards performed and recorded by generation after generation of singers. The lure of Broadway and Hollywood and the performing genius of such artists as Al Jolson, Fred Astaire, Ethel Waters, Judy Garland, Frank Sinatra, and Ethel Merman inspired a remarkable array of talented writers, including Dorothy Fields (“A Fine Romance,” “I Can’t Give You Anything but Love”), Frank Loesser (“Guys and Dolls”), Oscar Hammerstein II (from the groundbreaking “Show Boat” of 1927 through his extraordinary collaboration with Richard Rodgers), Johnny Mercer, Yip Harburg, Andy Razaf, Noël Coward, and Stephen Sondheim.

Reading Lyrics also celebrates the work of dozens of superb craftsmen whose songs remain known, but who today are themselves less known—writers like Haven Gillespie (whose “Santa Claus Is Coming to Town” may be the most widely recorded song of its era); Herman Hupfeld (not only the composer/lyricist of “As Time Goes By” but also of “Are You Makin’ Any Money?” and “When Yuba Plays the Rumba on the Tuba”); the great light versifier Ogden Nash (“Speak Low,” “I’m a Stranger Here Myself,” and, yes, “The Sea-Gull and the Ea-Gull”); Don Raye (“Boogie Woogie Bugle Boy,” “Mister Five by Five,” and, of course, “Milkman, Keep Those Bottles Quiet”); Bobby Troup (“Route 66”); Billy Strayhorn (not only for the omnipresent “Lush Life” but for “Something to Live For” and “A Lonely Coed”); Peggy Lee (not only a superb singer but also an original and appealing lyricist); and the unique Dave Frishberg (“I’m Hip,” “Peel Me a Grape,” “Van Lingo Mungo”).

The lyricists are presented chronologically, each introduced by a succinct biography and the incisive commentary of Robert Gottlieb and Robert Kimball.

ROBERT GOTTLIEB is the former Editor-in-Chief of Alfred A. Knopf and of The New Yorker. He is the dance critic for the New York Observer and author of George Balanchine: The Ballet Maker. He has previously edited Reading Jazz, Reading Lyrics (with Robert Kimball), the Everyman's Library edition of The Collected Stories of Rudyard Kipling, and The Journals of John Cheever.

“With around 170 lyricists on offer, the book makes its share of worthwhile rediscoveries . . . That’s the fun of Reading Lyrics. Readers can hum along with songs they know, while songs they don’t will have them hurrying off to the nearest music megastore.”
—The New York Times Book Review

“Reading Lyrics defies literary categorization. It’s reference work. It’s a singalong book. It’s a shadow history of taste and mores over much of the past century. It’s a valentine to a now-vanished artistic craft. And it’s an act of fond provocation.”
—The Boston Globe

“This wondrous and magical concoction is highly recommended.”
—The Wall Street Journal

“Both a groundbreaking social document and its own pleasure dome. Its 706 pages confirm the accomplishments of the greats, but they also provide surprises.”
—The New Yorker

“This music is an amazing art form; it’s a substantial cultural phenomenon.”
—Newsweek

“What joy! No sooner do the lyrics appear before one’s eyes than reading gives way to song.”
—Billboard Magazine

“One of the finest collections of words there is. To quote P.G. Wodehouse, ‘And I wish someday I could find my way/To the land where the good songs go.’ That land is Reading Lyrics. ‘S wonderful.”
—Newsday