Ways of Being: Animals, Plants, Machines: The Search for a Planetary Intelligence (Hardcover) 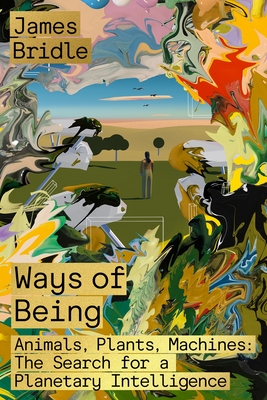 Ways of Being: Animals, Plants, Machines: The Search for a Planetary Intelligence (Hardcover)

Artist, technologist, and philosopher James Bridle’s Ways of Being is a brilliant, searching exploration of different kinds of intelligence—plant, animal, human, artificial—and how they transform our understanding of humans’ place in the cosmos.

What does it mean to be intelligent? Is it something unique to humans or shared with other beings— beings of flesh, wood, stone, and silicon? The last few years have seen rapid advances in “artificial” intelligence. But rather than a friend or companion, AI increasingly appears to be something stranger than we ever imagined, an alien invention that threatens to decenter and supplant us.

At the same time, we’re only just becoming aware of the other intelligences that have been with us all along, even if we’ve failed to recognize or acknowledge them. These others—the animals, plants, and natural systems that surround us—are slowly revealing their complexity, agency, and knowledge, just as the technologies we’ve built to sustain ourselves are threatening to cause their extinction and ours. What can we learn from them, and how can we change ourselves, our technologies, our societies, and our politics to live better and more equitably with one another and the nonhuman world?

The artist and maverick thinker James Bridle draws on biology and physics, computation, literature, art, and philosophy to answer these unsettling questions. Startling and bold, Ways of Being explores the fascinating, strange, and multitudinous forms of knowing, doing, and being that make up the world, and that are essential for our survival.

James Bridle is a writer and an artist. Their writing on art, politics, culture, and technology has appeared in magazines and newspapers including The Guardian, The Observer, Wired, The Atlantic, the New Statesman, frieze, Domus, and ICON. New Dark Age, their book about technology, knowledge, and the end of the future, was published in 2018 and has been translated into more than a dozen languages. In 2019, they wrote and presented New Ways of Seeing, a four-part series for BBC Radio 4. Their artworks have been commissioned by galleries and institutions including the V&A, Whitechapel Gallery, the Barbican, Hayward Gallery, and the Serpentine and have been exhibited worldwide and on the internet.

"Spanning millenniums, continents and academic disciplines, the scope of Bridle’s curiosity and comprehension is immense, and the possibilities of how other intelligences might augment or complement our own are exhilarating to consider . . . There is something hopeful and even heartening in their faith that our current disastrous course might be shifted not only by new policies and technologies but also—and more fundamentally—by the power of new ideas." —Stefan Merrill Block, New York Times Book Review

"Bridle is a clear, artful writer and a sweeping thinker . . . [A] hopeful book, almost an antidote. It imagines technology not as something separate and menacing, but as part of a grand unfolding—an 'efflorescence', to use Bridle's word—along an evolutionary continuum of human and 'more-than-human' ways of being in the world." —Peter Christie, Post Magazine

“In making clear the patience, imagination and humility required to better know and protect other forms of intelligence on Earth, [Bridle] has made an admirable contribution to the dawning interspecies age.”
—The Economist

"[A] fascinating survey . . . Bridle makes a solid case for his argument that 'everything is intelligent' and that all life on Earth is interconnected, and his notion that intelligence is 'one among many ways of being in the world' is well reasoned and convincing. This enlightening account will give readers a new perspective on their place in the world."
—Publishers Weekly

“An accessible but also technologically precise book . . . [Ways of Being] makes a remarkably compelling case for the universality of reason, the benefits to be reaped by acknowledging it, and the urgent need to do so given the reality of looming ecological collapse . . . A provocative, profoundly insightful consideration of forms of reason and their relevance to our shared future.”
—Kirkus Reviews (starred review)

“There's a new breed of thinkers—people who've grown up through the collapse of an old order and are looking at the first shoots of a very different future. James Bridle is right at the front of this thinking. His writing weaves cultural threads that aren't usually seen together, and the resulting tapestry is iridescently original, deeply disorientating and yet somehow radically hopeful. The only futures that are viable will probably feel like that. This is a pretty amazing book, worth reading and rereading.”
—Brian Eno

“James Bridle encourages you to widen the boundaries of your understanding, to contemplate the innate intelligence that animates the life force of octopuses and honeybees as well as apes and elephants. We humans are not alone in having a sense of community, a sense of fun, a sense of wonder and awe at the beauty of nature. Be prepared to re-evaluate your relationship with the amazing life forms with whom we share the planet. Fascinating, innovative and thought-provoking, I thoroughly recommend Ways of Being.”
—Dr. Jane Goodall, DBE, Founder of the Jane Goodall Institute & UN Messenger of Peace

"James Bridle’s wonderful book will make you feel and think the power of knowing how like all other lifeforms we are. There is nothing more important."
—Timothy Morton, author of Hyperobjects: Philosophy and Ecology After the End of the World

"James Bridle’s brilliant Ways of Being shows the importance of listening to one another and our surroundings, and creating new forms of community."
—Hans Ulrich Obrist, artistic director at the Serpentine Galleries, London

"A profound and elegant exploration of nonhuman intelligence that unfurls a wider, more expansive notion of thought itself. Bridle’s view of the mind, embedded in a more thoughtful world, is a revelation."
—Alexandra Kleeman, author of Something New Under the Sun