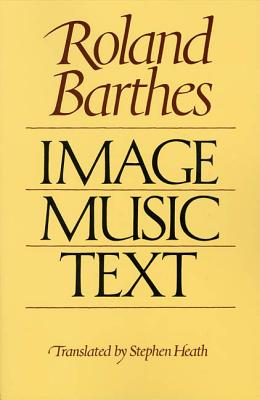 These essays, as selected and translated by Stephen Heath, are among the finest writings Barthes ever published on film and photography, and on the phenomena of sound and image. The classic pieces "Introduction to the Structural Analysis of Narrative" and "The Death of the Author" are also included.

Roland Barthes (1915-1980) was a French cultural and literary critic, whose clever and lyrical writings on semiotics made structuralism one of the leading movements of the twentieth century. Barthes had a cult following and published seventeen books, including Camera Lucida, Mythologies, and A Lover's Discourse.

Stephan Heath is a Fellow of Jesus College, University of Cambridge.

“The dominant perspective of the thirteen essays collected in Image-Music-Text is semiology. Barthes extends the 'empire of signs' over film and photography, music criticism . . . and writing and reading as historically situated activities. Several essays are frankly didactic. They review and expand the domain of a certain terminology: interpretive codes, narrational systems, functions and indices, denotation and connotation. Yet those impatient with special terms will not mind too much, for where else do they get, under the same cover, Beethoven and 'Goldfinger,' the Bible and 'Double Bang à Bangkok'? . . . Barthes is technical without being heavy, and a professional without ceasing to be an amateur. His precise yet fluent prose treats personal insight and systematic concepts with equal courtesy.” —Geoffrey Hartman, The New York Times Book Review