Dream on Monkey Mountain and Other Plays (Paperback) 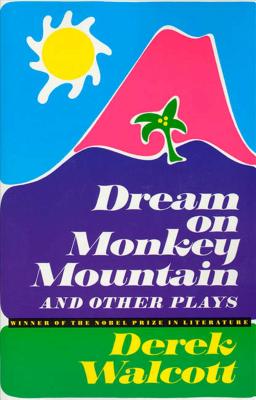 Dream on Monkey Mountain and Other Plays (Paperback)

On a Caribbean island, the morning after a full moon, Felix Hobain tears through the market in a drunken rage. Taken away to sober up in jail, all that night he is gripped by hallucinations: the impoverished hermit believes he has become a healer, walking from village to village, tending to the sick, waiting for a sign from God. In this dream, his one companion, Moustique, wants to exploit his power. Moustique decides to impersonate a prophet himself, ignoring a coffin-maker who warns him he will die and enraging the people of the island. Hobain, half-awake in his desolate jail cell, terrorized by the specter of his friend's corruption, clings to his visionary quest. He will try to transform himself; to heal Moustique, his jailer, and his jail-mates; and to be a leader for his people. Dream on Monkey Mountain was awarded the 1971 Obie Award for a Distinguished Foreign Play when it was first presented in New York, and Edith Oliver, writing in The New Yorker, called it "a masterpiece."

Three of Derek's Walcott's most popular short plays are also included in this volume: Ti-Jean and His Brothers; Malcochon, or The Six in the Rain; and The Sea at Dauphin. In an expansive introductory essay, "What the Twilight Says," the playwright explains his founding of the seminal dramatic company where these works were first performed, the Trinidad Theatre Workshop.

First published in 1970, Dream on Monkey Mountain and Other Plays is an essential part of Walcott's vast and important body of work.

Derek Walcott (1930-2017) was born in St. Lucia, the West Indies, in 1930. His Collected Poems: 1948-1984 was published in 1986, and his subsequent works include a book-length poem, Omeros (1990); a collection of verse, The Bounty (1997); and, in an edition illustrated with his own paintings, the long poem Tiepolo's Hound (2000). His numerous plays include The Haitian Trilogy (2001) and Walker and The Ghost Dance (2002). Walcott received the Queen's Medal for Poetry in 1988 and the Nobel Prize in Literature in 1992.
“Dream on Monkey Mountain is a poem in dramatic form or a drama in poetry, and poetry is rare in the modern theatre. Every line of it plays...there is a sound psychological basis for every action and emotion.” —Edith Oliver, The New Yorker