W Is For Webster: Noah Webster and his American Dictionary (Hardcover) 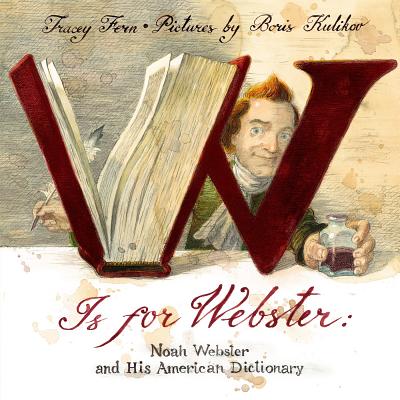 W Is For Webster: Noah Webster and his American Dictionary (Hardcover)

"A fascinating look at the determination and vision that led one man to create an essential resource." - Kirkus Reviews

From an early age, Noah Webster was an odd fellow who liked to talk big and loved learning. He thought America needed its own national language and knew he was just the man to create it. He started with a speller, including everyday words like "scab," "grub," and "mop," and moved on to create a small dictionary. He rode around on a horse, selling his books by hand. Then Noah decided to compile a complete and comprehensive dictionary of American English. He thought the book would take him five years to finish. It took twenty, but his dictionary today is the second-most printed book in the English language.

Tracey Fern is the author of the picture books Buffalo Music and Pippo the Fool, both Junior Library Guild selections. She lives with her family in West Newton, Massachusetts, where she’s always on the lookout for unusual rocks.

Boris Kulikov is the critically acclaimed illustrator of many children's books. His work includes Papa's Mechanical Fish by Candace Fleming; W is for Webster by Tracey Fern; and the Max's Math series, written by Kate Banks.He lives in Brooklyn, New York.

“An engaging, diverting read.” —The Bulletin of the Center for Children's Books

“A fascinating look at the determination and vision that led one man to create an essential resource.” —Kirkus

“T. rex lovers will gobble it up, and seekers of easy biographies will be hot on their heels.” —School Library Journal, starred review

“Tracey Fern ("Buffalo Music," "Pippo the Fool") turns a slice of a scientist's biography into an American adventure tale, describing how Brown and his rivals at other museums raced to find the best fossils and to discover new species.” —New York Times

“…truly breathtaking. This will captivate the masses of kids whose jaws drop in the presence of hulking fossils.” —Booklist, starred review

“Fern fills her text with all the salient facts but uses a breezy, humorous, awestruck voice that strikes just the right tone in telling the story of this fascinating, quirky scientist.” —Kirkus, starred review