The White Road: Journey into an Obsession (Hardcover) 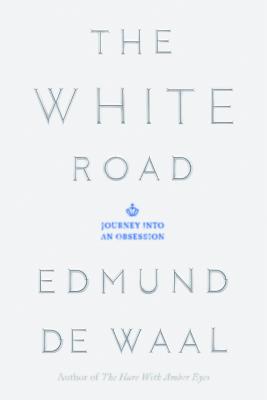 The White Road: Journey into an Obsession (Hardcover)

An intimate narrative history of porcelain, structured around five journeys through landscapes where porcelain was dreamed about, fired, refined, collected, and coveted.

Extraordinary new nonfiction, a gripping blend of history and memoir, by the author of the award-winning and bestselling international sensation, The Hare with the Amber Eyes.
In The White Road, bestselling author and artist Edmund de Waal gives us an intimate narrative history of his lifelong obsession with porcelain, or "white gold." A potter who has been working with porcelain for more than forty years, de Waal describes how he set out on five journeys to places where porcelain was dreamed about, refined, collected and coveted-and that would help him understand the clay's mysterious allure. From his studio in London, he starts by travelling to three "white hills"-sites in China, Germany and England that are key to porcelain's creation. But his search eventually takes him around the globe and reveals more than a history of cups and figurines; rather, he is forced to confront some of the darkest moments of twentieth-century history.
Part memoir, part history, part detective story, The White Road chronicles a global obsession with alchemy, art, wealth, craft, and purity. In a sweeping yet intimate style that recalls The Hare with the Amber Eyes, de Waal gives us a singular understanding of "the spectrum of porcelain" and the mapping of desire.

Edmund de Waal is an artist who has exhibited in museums and galleries around the world. His bestselling memoir, The Hare with Amber Eyes, has won many prizes and has been translated into twenty-nine languages. The White Road, a journey into the history of porcelain, was published in 2015. He lives in London with his family.

"The history of porcelain, as told in The White Road, is a constantly surprising, sometimes absolutely staggering, coming together of art, craft and commerce, politics and religion, national identity, larger-than-life characters and wild, sometimes ruinous obsession . . . A terrific book. If you read it, you’ll never look at porcelain the same way again." —Geoff Nicholson, Los Angeles Times

"The White Road is a unique book by a unique person. Polyglot, steeped in art and literature and history, able to throw a pot and turn a sentence with equal skill, endlessly curious and stupendously diligent, aesthetic to his fingertips but also deeply moral, Mr. de Waal brings a lot to the table, and with The White Road he goes all in." —Ben Downing, The Wall Street Journal

"It is rare for someone to write as well as Edmund de Waal, all the more since it's his secondary vocation . . . The White Road is the story of how objects, through the accumulation of intent, labor and the patina of history, accrue a sense of self." —Brian Thomas Gallagher, The Seattle Times

"[A] shimmering paean to porcelain . . . De Waal digs deep into the substance of his live, and what he shares is precious." —Jean Zimmerman, NPR

“De Waal is a master of telling stories through material objects. He can see a vase and not only imagine the kind of room it once inhabited but the type of woman who might have brushed her fingertips across its lip . . . It’s de Waal’s own obsession—the man counts pots when he can’t sleep at night—that infuses the narrative with a true sense of the hunt . . . He is wonderfully manic in his research . . . He allows himself to get lost for weeks, to travel someplace only to return empty-handed—which makes for a true adventure and a pleasure to read.” —Thessaly La Force, The New Yorker

“The White Road is filled with marvelous examples of storytelling, and de Waal has a gift for inhabiting his characters. Also, the historical material is interleaved with stories from de Waal’s own life as a ceramicist, which adds an extra and very welcome dimension to the tale.”—Christina Thompson, The Boston Globe

“At once meditation, memoir, and travelogue as well as history, The White Road is one of those unclassifiable books that simply astounds with the author’s infectious love of his subject . . . De Waal’s prose is both elegant and powerful . . . Despite covering so many places, so many historical periods, and so many themes, de Waal’s beautiful narrative voice and his love for his subject manage to shape this book into an almost seamlessly formed whole. Which leaves me with my one resentment regarding The White Road: It’s damned unfair that such a distinguished artist should also be such a great writer.” —Kevin O’Kelly, The Christian Science Monitor

“De Waal reveals the depths and permutations of his life-shaping fascination with porcelain . . . [He] brings a historian’s ardor for detail and a poet’s gifts for close observation and radiant distillation to this exquisite chronicle of his extensive porcelain investigations . . . De Waal’s passionately and elegantly elucidated story of porcelain, laced with memoir and travelogue, serves as a portal into the madness and transcendence of our covetous obsession with beauty.” —Donna Seaman, Booklist (starred review)

“A lyrical melding of art history, memoir, and philosophical meditation . . . In short passages of allusive, radiant prose, [de Waal] chronicles his journeys in search of both the materials and the history of porcelain, discovering along the way men as obsessed as he . . . De Waal's poetically recounted journey is a revelation.” —Kirkus Reviews (starred review)

“[De Waal] blends art history and personal travelogue in this immersive hands-on study of porcelain and its commercial and artistic appeal over the centuries . . . He enlivens his account with portraits of the people whose quirky personalities and entrepreneurial zeal advanced the manufacture of porcelain across Europe . . . A truly remarkable story.” —Publishers Weekly (starred review)

“An immensely enjoyable meditation on what happens when the right mix of stone and clay enter the incandescent heat of a kiln . . . Journeying to Jingdezhen, Dresden, South Carolina, and southwest England, de Waal tells the story of determined experimenters who reproduced the magic the Chinese had mastered . . . [A] page-turning account, both sweeping and intimate.” —Library Journal