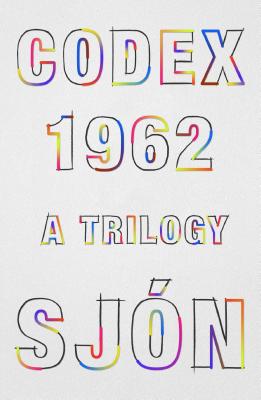 Over the course of four dazzling novels translated into dozens of languages, Sjón has earned a global reputation as one of the world’s most interesting writers. But what the world has never been able to read is his great trilogy of novels, known collectively as CoDex 1962—now finally complete.

Josef Löwe, the narrator, was born in 1962—the same year, the same moment even, as Sjón. Josef’s story, however, stretches back decades in the form of Leo Löwe—a Jewish fugitive during World War II who has an affair with a maid in a German inn; together, they form a baby from a piece of clay. If the first volume is a love story, the second is a crime story: Löwe arrives in Iceland with the clay-baby inside a hatbox, only to be embroiled in a murder mystery—but by the end of the volume, his clay son has come to life. And in the final volume, set in present-day Reykjavík, Josef’s story becomes science fiction as he crosses paths with the outlandish CEO of a biotech company (based closely on reality) who brings the story of genetics and genesis full circle. But the future, according to Sjón, is not so dark as it seems.

"Sjon is a prodigal storyteller in all senses of the phrase . . . He is a master of atmosphere, a fine observer of the cross-hatchings of human motivation, and a vivid noticer of detail." —Garth Risk Hallberg, The New York Times Book Review

"The Icelandic literary maverick and Oscar-nominated songwriter Sjón writes with a poet's ear and a musician's natural sense of rhythm. [In] this extraordinary performance . . . the effect is hypnotic. The reader becomes a gleeful collaborator in an extravaganza in which Bosch meets Chagall, with touches of Tarantino." —Eileen Battersby, The Guardian

"[A] challenging and cacophonous epic by the talented Sjón . . . An amalgam of creation myth, surrealist absurdity, ancient saga, and contemporary satire." —Booklist

"Sjón is more than a novelist; he is a storyteller in the ancient tradition, and this work may be remembered as his masterpiece." —Publishers Weekly (starred review)

"In this beguiling, surpassingly eccentric triptych, Icelandic novelist Sjón takes on, in turn, romance (classic, not Gothic), mystery, and science fiction to examine how people parse themselves into little camps and try to make their way through this harsh world . . . Sjón’s work is unlike anything else in contemporary fiction. Strange—but stunning." —Kirkus Reviews (starred review)

"Sjón can flick from angelic frolics to seedy violence as if each tale were a smooth refraction of the last. He has a knack for high comedy, too . . . Victoria Cribb deserves equal praise for bringing all this zest into English so well." —Cal Revely-Calder, The Daily Telegraph (UK)

"A master of Icelandic fiction . . . Sjón's stories compound the dreamscapes of surrealism, the marvels of Icelandic folklore and a pop-culture sensibility into free-form fables." —The Economist (UK)

“Sjón delivers a complex story in which violence and desire, voices and actions, are beautifully woven together.” —Politiken (Denmark)

“It’s as if Hans Christian Andersen is telling a story by Kafka, or vice versa.” —Dagens Nyheter (Sweden)

“Sjón’s book gives us hope for the novel as an art form.” —Sydsvenska Dagbladet (Sweden)