Every Day She Rose (Paperback) 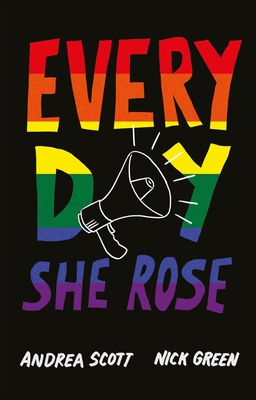 Every Day She Rose (Paperback)

After the Black Lives Matter protest at the 2016 Toronto Pride Parade, two friends find their racial and queer politics aren't as aligned as they thought, and the playwrights behind them must figure out how to write about the fallout.

Cathy Ann, a straight Black woman, and her roommate Mark, a gay white man, came home from the parade with such differing views of what happened and how it affected their own communities. Cathy Ann agrees with the protest that the police presence at the parade doesn't make her feel safe, while Mark felt safer with them there, especially in the wake of the Pulse nightclub shooting in Orlando. Frustrated he can't see the bigger issue, Cathy Ann questions if she can continue living with Mark. Simultaneously, playwrights Andrea and Nick--who share the same identities as their characters--pause throughout the show to figure out how to work together to tell the story of a significant turning point in a friendship.

Through both sets of dialogue, Every Day She Rose is a powerful exploration of white supremacy, privilege, and patriarchy in supposed safe spaces.

Andrea Scott's play Eating Pomegranates Naked won the RBC Arts Professional Award and was named Outstanding Production at the 2013 SummerWorks Festival. Better Angels: A Parable won the SummerWorks Award for Outstanding Production. Both were published by Scirocco Drama in 2018. Don't Talk to Me Like I'm Your Wife, which won the Cayle Chernin Award for theatre, ran at SummerWorks in 2016. 2019 saw her co-written play with Nick Green, Every Day She Rose wow audiences at Buddies in Bad Times Theatre. Her play about Viola Desmond, Controlled Damage, had its sold-out world premiere at Neptune Theatre in 2020 and will open at the Grand Theatre in 2022. She won the Magee Diversity Screenwriter's Award for her first TV script, Dust to Dust. Her dark comedy Bad Habits landed her a job in the all Black writer's room of The Porter (BET/CBC) which she followed up with snagging a spot pitching to Netflix with her supernatural drama Cassidy Must Die. 2021 saw her winning $10,000 from Amazon and the Indigenous Screen Office, pitching her coming-of-age dramedy DONE! She's currently working in the writer's room on the fifteenth season of Murdoch Mysteries while co-creating a one-hour drama for Sienna Films. She lives in Toronto. Nick Green is a Dora and Sterling Award-winning playwright, and the creator of the Social Distancing Festival. Credits include Happy Birthday Baby J (Shadow Theatre); Every Day She Rose (Nightwood Theatre, co-written with Andrea Scott); Fangirl (book; Launch Pad at the Musical Stage Company); In Real Life (book; Canadian Music Theatre Projects); Dinner with the Duchess (Next Stage Festival, BroadwayWorld Toronto Award); Body Politic (Buddies in Bad Times/lemonTree Creations; Dora Award); Poof! The Musical (book and lyrics; Capitol Theatre, Sterling Award nomination); and The Fabulous Buddha Boi (Guys UnDisguised, Sterling Award). He lives in Toronto.