India in the G20: Rule-taker to Rule-maker (Hardcover) 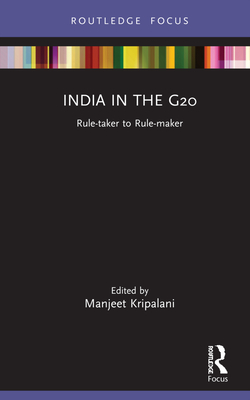 India in the G20: Rule-taker to Rule-maker (Hardcover)

This book analyses the importance of the G20 to India, its role so far, and how it can leverage its presidency year to be an influential author of new global rules.

In 2023, India will be the President of the G20 Summit, the world's most influential multilateral economic forum. For countries like India, the G20 is a unique global institution, where developed and developing countries have equal stature. This creates opportunities to showcase their global political, economic and intellectual leadership, have a significant impact on the global economic governance agenda and make it more inclusive. This volume discusses how the Presidency year gives India the opportunity to '... hold the pen, write the rules' and lead the G20 year intellectually, financially, managerially and administratively. It provides a ringside view of India's path to the G20 Presidency and examines issues such as the core agenda of the G20; explains the significance of forums like T20, B20, and their proliferations; India's journey as a marginal player in the G20 to its current status; issue of dedicated leadership and management; and India's Agenda for 2023.