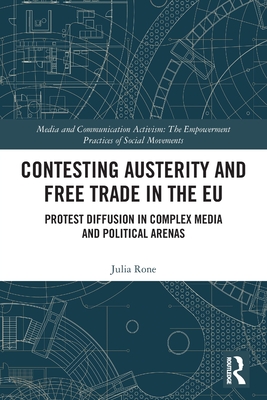 The book explores the diffusion of protest against austerity and free trade agreements in the wave of contention that shook the EU following the 2008 economic crisis.

It discusses how protests against austerity and free trade agreements manifested a wider discontent with the constitutionalization of economic policy and the way economic decisions have been insulated from democratic debate. It also explores the differentiated politicization of these issues and the diffusion of protests across Western as well as Eastern Europe, which has often been neglected in studies of the post-crisis turmoil. Julia Rone emphasizes that far from being an automatic spontaneous process, protest diffusion is highly complex, and its success or failure can be impacted by the strategic agency and media practices of key political players involved such as bottom-up activists, as well as trade unions, political parties, NGOs, intellectuals and mainstream media.

This is an important resource for media and communications students and scholars with an interest in activism, political economy, social movement studies and protest movements.