Nineteenth-Century Italian Women Writers and the Woman Question: The Case of Neera (Paperback) 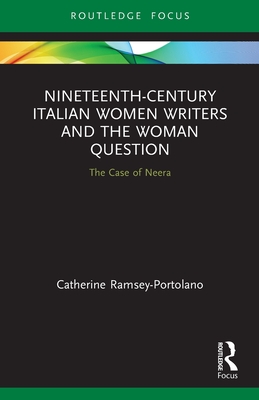 Nineteenth-Century Italian Women Writers and the Woman Question: The Case of Neera (Paperback)

Nineteenth-Century Italian Women Writers and the Woman Question focuses on the literary, journalistic and epistolary production of Italian woman writer Neera, pseudonym for Anna Radius Zuccari, one of the most prolific and successful women writers of late nineteenth-century Italy. This study proposes to bring Neera out of the shadows of literary marginality to which she has long been confined by analyzing her contribution to literary and cultural debates as testimony to the pivotal role she played in the creation of a female literary voice within the Italian fin-de-si cle context. Drawing from the Anglo-American feminist critical tradition; modern Italian feminist theory on the maternal order and sexual difference; and a close reading of Neera's literary, theoretical and epistolary writings this volume examines Neera's work from a three-pronged perspective: as promoter of a maternal order in contrast to the existent paternal order, as one of few women writers to participate actively in Italy's verismo movement and as epistolary correspondent of leading representatives within fin-de-si cle Italian literary and journalistic circles. Nineteenth-Century Italian Women Writers and the Woman Question represents the first monographic volume in English dedicated exclusively to this important Italian woman writer, repositioning her within the Italian literary landscape and canon.

Catherine Ramsey-Portolano is Associate Professor and Director of Italian Studies and Modern Languages at The American University of Rome in Rome, Italy, where she teaches courses on Italian language, culture, literature and film. She has completed a BA (The University of Tennessee-Knoxville), MA (The University of Wisconsin-Madison), Laurea (LUMSA University-Rome) and PhD (University of Chicago), all in Italian Literature. Her books include Performing Bodies: Female Illness in Italian Literature and Cinema (1860-1920), The Future of Italian Teaching: Media, New Technologies and Multi-Disciplinary Perspectives and Rethinking Neera.