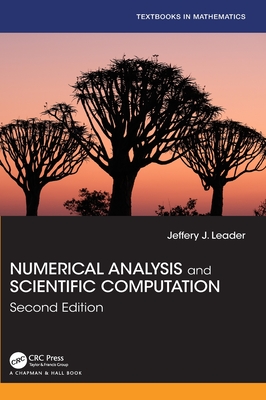 This is an introductory single-term numerical analysis text with a modern scientific computing flavor. It offers an immediate immersion in numerical methods featuring an up-to-date approach to computational matrix algebra and an emphasis on methods used in actual software packages, always highlighting how hardware concerns can impact the choice of algorithm. It fills the need for a text that is mathematical enough for a numerical analysis course yet applied enough for students of science and engineering taking it with practical need in mind.

The standard methods of numerical analysis are rigorously derived with results stated carefully and many proven. But while this is the focus, topics such as parallel implementations, the Basic Linear Algebra Subroutines, halfto quadruple-precision computing, and other practical matters are frequently discussed as well. Prior computing experience is not assumed. Optional MATLAB subsections for each section provide a comprehensive self-taught tutorial and also allow students to engage in numerical experiments with the methods they have just read about. The text may also be used with other computing environments. This new edition offers a complete and thorough update. Parallel approaches, emerging hardware capabilities, computational modeling, and data science are given greater weight.
Jeffery J. Leader earned the Sc.M. and Ph.D. in Applied Mathematics from Brown University, where his advisor was Philip J. Davis. He specializes in numerical analysis and computational science. He has taught at Harvey Mudd College, the Naval Postgraduate School, the U.S. Military Academy, Santa Clara University (in the School of Engineering), and the U.S. Air Force Academy (as a Distinguished Visiting Professor). He has spent summers consulting at the Army and Air Force Research Labs. and the Naval Surface Warfare Center, as well as a sabbatical at Sandia National Labs. For the past 22 years he has been at Rose-Hulman Institute of Technology where he is Professor of Mathematics and founded and directs the major in Computational Science.