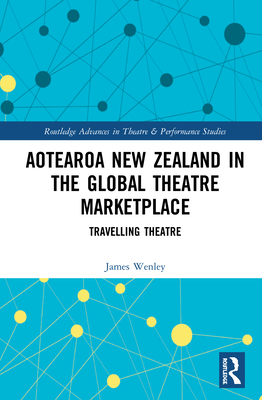 Aotearoa New Zealand in the Global Theatre Marketplace offers a case study of how the theatre of Aotearoa has toured, represented and marketed itself on the global stage. How has New Zealand work attempted to stand out, differentiate itself, and get seen by audiences internationally?

This book examines the journeys of a dynamic range of culturally and theatrically innovative works created by Aotearoa New Zealand theatre makers that have toured and been performed across time, place and theatrical space: from Moana Oceania to the Edinburgh Festival Fringe, from a Māori Shakespeare adaptation to an immersive zombie theatre experience.

Drawing on postcolonialism, transnationalism, cosmopolitanism and globality to understand how Aotearoa New Zealand has imagined and conceived of itself through drama, the author investigates how these representations might be read and received by audiences around the world, variously reinforcing and complicating conceptions of New Zealand national identity. Developing concepts of theatrical mobility, portability and the market, this study engages with the whole theatrical enterprise as a play travels from concept and scripting through to funding, marketing, performance and the critical response by reviewers and commentators.

This book will be of global interest to academics, producers and theatre artists as a significant resource for the theory and practice of theatre touring and cross-cultural performance and reception.

James Wenley is a theatre academic, practitioner and critic with a passion for promoting the theatre of Aotearoa New Zealand. He was awarded a PhD from the University of Auckland and is curently a lecturer in theatre programme of Te Herenga Waka--Victoria University of Wellington. James directs and produces for his company Theatre of Love. He is the editor and founder of TheatreScenes.co.nz, was a theatre critic for Metro Magazine and won the People's Choice Award for Best Critic at the 2015 Auckland Theatre Awards. His writing has been published in the Journal of New Zealand Literature, The Pantograph Punch and Playmarket Annual.