A Debate on God and Morality: What Is the Best Account of Objective Moral Values and Duties? (Hardcover) 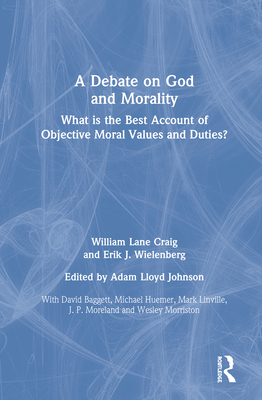 A Debate on God and Morality: What Is the Best Account of Objective Moral Values and Duties? (Hardcover)

In 2018, William Lane Craig and Erik J. Wielenberg participated in a debate at North Carolina State University, addressing the question: God and Morality: What is the best account of objective moral values and duties? Craig argued that theism provides a sound foundation for objective morality whereas atheism does not. Wielenberg countered that morality can be objective even if there is no God. This book includes the full debate, as well as endnotes with extended discussions that were not included in the debate. It also includes five chapters by other philosophers who have written substantive responses to the debate - J. P. Moreland, David Baggett, Mark Linville, Wes Morriston, and Michael Huemer. The book provides crucial resources for better understanding moral realism and its dependence on, or independence from, theistic foundations.

A valuable debate about whether or not God is the best explanation for objective morality, bringing together theists and atheists working on the same subject who normally are not in conversation with each other. Includes clear coverage of ontological and epistemological issues in metaethical theories, focusing on Divine Command Theory and Non-natural Robust Moral Realism. Engaging and accessible throughout, making the book well suited for undergraduate and seminary classrooms.
DebatersErik J. Wielenberg is Professor of Philosophy at DePauw University and is the author of Value and Virtue in a Godless Universe (2005), God and the Reach of Reason: C.S. Lewis, David Hume, and Bertrand Russell (2007); and Robust Ethics: The Metaphysics and Epistemology of Godless Normative Realism (2014).William Lane Craig is Professor of Philosophy at the Talbot School of Theology and Houston Baptist University. He has authored or edited more than forty books, including, Divine Foreknowledge and Human Freedom (1990), Theism, Atheism, and Big Bang Cosmology (with Quentin Smith, 1995), The Kalam Cosmological Argument (2000), God, Time, and Eternity (2001), and God Over All (2016).EditorAdam Lloyd Johnson is a Ph.D. student at Southeastern Baptist Theological Seminary.ContributorsP. Moreland, David Baggett, Mark Linville, Wes Morriston, and Michael Huemer