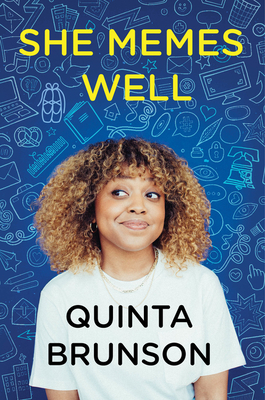 “In She Memes Well, Quinta gives more than a peek behind the curtain. She invites us in, lets us poke around and offers a balm for our aching souls. She moves beyond the jokes into something much deeper, something we may not recognize we need. She is the friend, sister, lover, cool co-worker we all wished we had.”—Gabrielle Union, actress and New York Times bestselling author of We’re Going to Need More Wine

From comedian Quinta Brunson (creator and star of Abbott Elementary) comes a deeply personal and funny collection of essays about trying to make it when you're struggling, the importance of staying true to your roots, and how she's redefined humor online.

Quinta Brunson is a master at breaking the internet. Before having any traditional background in media, her humorous videos were the first to go viral on Instagram’s platform. From there, Brunson’s wryly observant POV helped cement her status in the comedy world at large, with roles on HBO, Netflix, ABC, Adult Swim, BuzzFeed, the CW, and Comedy Central. Now, Brunson is bringing her comedic chops to the page in She Memes Well, an earnest, laugh-out-loud collection about this unusual road to notoriety.

In her debut essay collection, Quinta applies her trademark humor and heart to discuss what it was like to go from a girl who loved the World Wide Web to a girl whose face launched a thousand memes. With anecdotes that range from the ridiculous—like the time she decided to go clubbing wearing an outfit she describes as "Gary Coleman meets metrosexual pirate"—to more heartfelt material about her struggles with depression, Quinta's voice is entirely authentic and eminently readable. With its intimate tone and hilarious moments, She Memes Well will make you feel as if you're sitting down with your chillest, funniest friend.

QUINTA BRUNSON is an actor, producer, and stand-up comedian, known for her lead role in A Black Lady Sketch Show and for creating and starring in Abbott Elementary. She’s been named one of Forbes’s “30 Under 30” and has been featured in Vogue, People, Essence, the Hollywood Reporter, and elsewhere for her pioneering work in comedy. Born in Philadelphia, she currently lives in Los Angeles.

“Hilarious…She Memes Well balances jokes, autobiography and serious thoughts about the state of the country.” — The New York Times

“In She Memes Well, Quinta gives more than a peek behind the curtain. She invites us in, lets us poke around and offers a balm for our aching souls. She moves beyond the jokes into something much deeper, something we may not recognize we need. She is the friend, sister, lover, cool co-worker we all wished we had.” — Gabrielle Union, actress and New York Times bestselling author of We’re Going to Need More Wine

“Quinta Brunson may meme well, but to limit her to just being an Internet personality would be a disservice to you and her. She (and this book) are equal parts hilarious and thoughtful. I’m a fan of Quinta as a writer, as a performer and, most importantly, as a person. I promise after reading her book, you will be a fan too.” — Nick Kroll, actor, comedian, and producer

“A gloriously insightful, gut-busting glimpse into the brilliant mind of the internet’s golden child herself. She Memes Well is a beautiful trip down memory lane and an inspiring nudge to any creative looking to make their own eternal imprint, online or off.” — Issa Rae, Golden Globe-nominated actress (Insecure) and New York Times bestselling author of The Misadventures of Awkward Black Girl

“The luminescent Quinta Brunson, who has already captivated the hearts of internet and television viewers alike, now hammers home her brilliance with the written word. One thing that really stuck with me was her age when she first saw Chocolate Rain. She is very young. Enjoy." — Chelsea Peretti, comedian and actor

"In this hilarious and poignant memoir, comedian Brunson shares her head and her heart for readers who may only know her face from the internet...Brunson’s razor-sharp wit and gratitude for her extraordinary life leap off every page. Perfect for fans of Bossypants and Misadventures of Awkward Black Girl." — Booklist, STARRED review