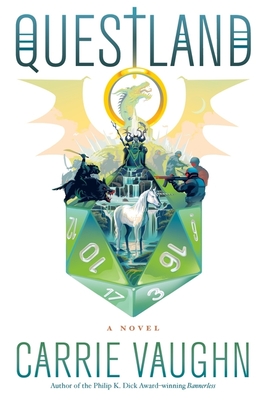 YOU FIND YOURSELF IN A MAZE FULL OF TWISTY PASSAGES . . .

Literature professor Dr. Addie Cox is living a happy, if sheltered, life in her ivory tower when Harris Lang, the famously eccentric billionaire tech genius, offers her an unusual job. He wants her to guide a mercenary strike team sent to infiltrate his island retreat off the northwest coast of the United States. Addie is puzzled by her role on the mission until she understands what Lang has built: Insula Mirabilis, an isolated resort where tourists will one day pay big bucks for a convincing, high-tech-powered fantasy-world experience, complete with dragons, unicorns, and, yes, magic.

Unfortunately, one of the island's employees has gone rogue and activated an invisible force shield that has cut off all outside communication. A Coast Guard cutter attempting to pass through the shield has been destroyed. Suspicion rests on Dominic Brand, the project’s head designer—and Addie Cox's ex-boyfriend. Lang has tasked Addie and the mercenary team with taking back control of the island at any cost.

But Addie is wrestling demons of her own—and not the fantastical kind. Now, she must navigate the deadly traps of Insula Mirabilis as well as her own past trauma. And no d20, however lucky, can help Addie make this saving throw.

Carrie Vaughn survived her air force brat childhood and managed to put down roots in Colorado. Her first book, Kitty and the Midnight Hour, launched a popular series of novels about a werewolf named Kitty who hosts a talk-radio advice show. She is also the author of Voices of Dragons, her debut novel for teen readers. Ms. Vaughn lives in Colorado.

"In a love letter to the fantasy and sf community, Vaughn geeks out in this Westworld-meets-The Lord of the Rings adventure . . . This guilty pleasure will interest readers who’ve come to love Vaughn’s amusing writing style and strong female protagonists." — Booklist

"Questland lifts unrepentantly from nearly every fantasy trope out there but does so in a knowing way that shows why these tropes work so well. The structure of Vaughn’s story is familiar, yes, but simultaneously fresh and new.” — Locus