A Game of Thrones: The Graphic Novel: Volume Four (Hardcover) 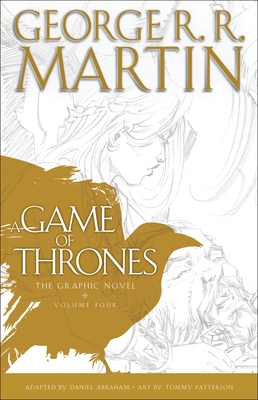 A Game of Thrones: The Graphic Novel: Volume Four (Hardcover)

Bestselling writer Daniel Abraham and acclaimed illustrator Tommy Patterson bring their stunning graphic-novel adaptation of George R. R. Martin’s classic A Game of Thrones to a stunning finish that merits a place alongside the majestic original on the bookshelf of every fantasy fan.

The death of King Robert Baratheon and the imprisonment of his Hand, Lord Eddard Stark of Winterfell, has set the great houses of Westeros at one another’s throats.

In Winterfell, Eddard’s eldest son and heir, Robb Stark, has gathered an army and is pushing south, determined to free his father. Along the way, he pledges to marry the daughter of Lord Walder Frey in exchange for a military advantage that allows him to capture Jaime Lannister—a powerful bargaining chip to ensure Lord Eddard’s safe release. But it is one thing to capture the Kingslayer and quite another to hold him.

Meanwhile, in King’s Landing, young King Joffrey has other ideas than an exchange of prisoners. Ignoring the advice of his mother, Queen Cersei, he throws oil on the flames of conflict and ignites a conflagration that seems likely to consume not only the Starks but all of Westeros—unless Tyrion Lannister, the Imp, can bring the mad boy-king to heel.

Beyond the Wall, greater dangers are brewing, as a winter as brutal as any in history approaches, bringing with it unnatural creatures out of legend. There, Eddard’s bastard, Jon Snow, must decide once and for all where his loyalties lie.

And across the Narrow Sea, Daenerys Targaryen will learn the true measure of grief—and emerge from its fiery depths transformed, hardened, and ready to claim what is hers by right: the Iron Throne.
George R. R. Martin is the #1 New York Times bestselling author of many novels, including the acclaimed series A Song of Ice and Fire—A Game of Thrones, A Clash of Kings, A Storm of Swords, A Feast for Crows, and A Dance with Dragons—as well as Tuf Voyaging, Fevre Dream, The Armageddon Rag, Dying of the Light, Windhaven (with Lisa Tuttle), and Dreamsongs Volumes I and II. He is also the creator of The Lands of Ice and Fire, a collection of maps from A Song of Ice and Fire featuring original artwork from illustrator and cartographer Jonathan Roberts, and The World of Ice & Fire (with Elio M. García, Jr., and Linda Antonsson). As a writer-producer, Martin has worked on The Twilight Zone, Beauty and the Beast, and various feature films and pilots that were never made. He lives with the lovely Parris in Santa Fe, New Mexico.

Daniel Abraham has been nominated for the Hugo, the Nebula, and the World Fantasy awards, and won the International Horror Guild Award. He has written the graphic novel adaptations of George R. R. Martin’s Fevre Dream and “Skin Trade,” as well as original scripts for Wild Cards: The Hard Call.

Tommy Patterson’s illustrator credits include Farscape for Boom! Studios, the movie adaptation The Warriors for Dynamite Entertainment, and Tales from Wonderland: The White Night, Red Rose, and Stingers for Zenescope Entertainment.