How Lucky You Can Be: The Story of Coach Don Meyer (Hardcover) 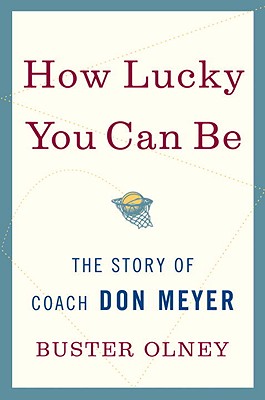 How Lucky You Can Be: The Story of Coach Don Meyer (Hardcover)

In September 2008, Northern State University men’s basketball coach Don Meyer stood on the brink of immortality. He was about to surpass the legendary Bobby Knight to become the all-time NCAA wins leader in men’s basketball. Then, on a two-lane road in South Dakota, everything changed in an instant.

In How Lucky You Can Be, acclaimed sports journalist Buster Olney tells the remarkable story of the successive tragedies that befell Coach Meyer but could not defeat him. Laid low by a horrific car accident that led to the amputation of his left leg below the knee, Coach Meyer had barely emerged from surgery when his doctors informed him that he also had terminal cancer. In the blink of an eye, this prototypical 24/7 workaholic coach—who arrived at the gym most mornings before 6 a.m.—found himself forced to reexamine his priorities at the age of sixty-three. A model of reserve, Coach Meyer had sacrificed much of his emotional life to his program. His wife, Carmen, felt disconnected because of his habitual reticence, while his three children—all now well into adulthood—had long had to compete with basketball for his attention.

With sensitivity and skill, Olney shows how Coach Meyer mined his physical ordeal for the spiritual strength to transform his life. In the months that followed his accident and diagnosis, he reached out to family, friends, and former players in a way he had never been able to do before, making the most of this one last opportunity to tell those close to him how he felt about them—and in turn he received an outpouring of affirmation that confirmed how deeply he had affected others. Sustained throughout an often painful recovery by his love of basketball, he would return to the court once more—with a newfound appreciation for the game’s place in his life.

The inspirational story of a life renewed by unimaginable hardship, How Lucky You Can Be proves that it’s never too late to start making changes—and reminds us that fortune can smile upon us even in our most trying hours.

Robert "Buster" Olney is a senior writer at "ESPN The Magazine" and an analyst for ESPN's "Baseball Tonight." He is the author of the "New York Times" bestseller "The Last Night of the Yankee Dynasty: The Game, the Team, " and the "Cost of Greatness.

"Those of us who savor fine sports journalism have long known that Buster Olney knows the baseball beat. Now, with this beautifully conceived and elegantly written executed book Olney shows that he knows the beating heart of life and the pulse of humanity that makes sports matter." -George F. Will, Pulitzer-Prize winning journalist

"Don Meyer is a dear friend to me and the entire Basketball Community. His passion to teach, to share, and to live is unmatched. Buster Olney does a magical job of capturing this truly unique man and presents him in a way that is surprising and unforgettable." -Mike Krzyzewski, Coach of the Duke Blue Devils

"There are very few coaches who have positively impacted the game of basketball and the people who coach it as Don Meyer has done. His passion for the game, for teaching and for building character as well as his commitment to team are legendary. Coach Meyer has taught and given so much to us, and our game is better for it. This book chronicles not only his life as a coach, but his journey as a man through triumph and adversity. His story is a true inspiration and one which everyone should know." -Pat Summitt, Coach of the Tennesee Lady Vols