The Eighty-Dollar Champion: Snowman, The Horse That Inspired a Nation (Paperback) 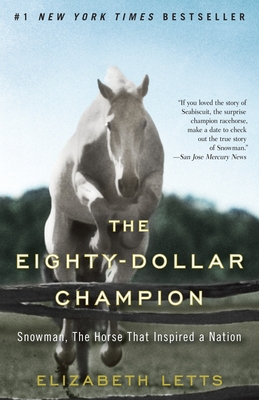 The Eighty-Dollar Champion: Snowman, The Horse That Inspired a Nation (Paperback)

“America loves underdogs and stories that go against the odds. You couldn't get much longer odds than a plow-horse headed for the knacker's yard and a cash-strapped Dutchman winning the National Horse Show in Madison Square Garden. But win they did, inspiring the nation with the Cinderella story of a horse who escaped the butcher and learned how to fly. This is one for the heart!”
— Deon Stonehouse, Sunriver Books, Sunriver, OR

#1 NEW YORK TIMES BESTSELLER • The dramatic and inspiring story of a man and his horse, an unlikely duo whose rise to stardom in the sport of show jumping captivated the nation

Harry de Leyer first saw the horse he would name Snowman on a truck bound for the slaughterhouse. The recent Dutch immigrant recognized the spark in the eye of the beaten-up nag and bought him for eighty dollars. On Harry’s modest farm on Long Island, he ultimately taught Snowman how to fly. Here is the dramatic and inspiring rise to stardom of an unlikely duo. One show at a time, against extraordinary odds and some of the most expensive thoroughbreds alive, the pair climbed to the very top of the sport of show jumping. Their story captured the heart of Cold War–era America—a story of unstoppable hope, inconceivable dreams, and the chance to have it all. They were the longest of all longshots—and their win was the stuff of legend.

Elizabeth Letts is the award-winning author of two novels, Quality of Care and Family Planning, and one children’s book, The Butter Man. Quality of Care was a Literary Guild, Doubleday Book Club, and Books-A-Million Book Club selection. An equestrian from childhood, Letts represented California as a junior equestrian, and was runner-up in the California Horse and Rider of the Year competition. She currently lives with her husband and four children in Baltimore, Maryland.

“[A] classic American dream story, with a down-on-its-luck horse galloping in for good measure.”—USA Today

“This is a wonderful book—joyous, heartfelt, and an eloquent reminder that hope can be found in the unlikeliest of places. Most of all, it’s a moving testament to the incredible things that can grow from the bond between animals and humans.”—Gwen Cooper, author of Homer’s Odyssey

“[Elizabeth Letts] details the intricacies of the show world beautifully, [but it’s] the relationship between the people in [Harry’s] life and this remarkable, humble horse that will captivate the reader.”—The Star-Ledger

“The story is thrilling. . . . Letts’s taut, detailed writing vividly recounts the excitement of the shows; the heights these underdogs climbed; the world of the Eisenhower fifties; and what Snowman and Harry meant to the everyday people they inspired.”—Shelf Awareness

“If the true stories of horses Secretariat or Seabiscuit kept you spellbound, then consider leaving the racetrack setting to learn about the equestrian world’s shock in 1958 when an eighty-dollar plow horse arrived to compete in its top show.”—Fayetteville Observer

“Written in evocative, skilled prose that rings true to the tenor of postwar America . . . Letts deftly calibrates the emotion and suspense that are an indelible part of this tale.”—BookPage