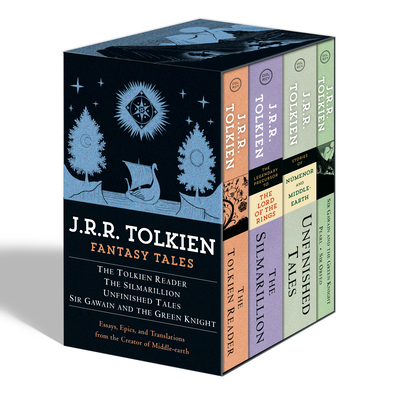 
On Our Shelves Now at:
The ultimate companion to The Hobbit and The Lord of the Rings—a four-book collection of stories, translations, and archival material by the master of fantasy

Perfect for readers looking to dig deeper into Tolkien’s writing, this four-book set includes everything from hard-to-find short writings and translations of medieval poems to the must-have companion to the beloved Lord of the Rings epic, The Silmarillion.

The Tolkien Reader: A collection of fantastical short stories and essays on imagination and narrative forms, including The Adventures of Tom Bombadil and Tree and Leaf

The Silmarillion: The epic precursor to The Lord of the Rings, set primarily in the First Age of Middle-earth, recounting the ancient drama of the Elder Days and the harrowing origins of the adventure that ends with Frodo and the One Ring

Unfinished Tales: Collected lore and legends from across the ages of Middle-earth, including the only surviving story of Númenor, the greatest kingdom of men, before its downfall in the Second Age

Sir Gawain and the Green Knight, Pearl, Sir Orfeo: Three masterpieces of medieval poetry, skillfully translated by J.R.R. Tolkien, that weave a bright tapestry of chivalry and wizards, knights and holy quests
John Ronald Reuel Tolkien was born on January 3, 1892, in Bloemfontein, South Africa. After serving in World War I, he embarked upon a distinguished academic career and was recognized as one of the finest philologists in the world. He was a professor of Anglo-Saxon at Oxford, a fellow of Pembroke College, and a fellow of Merton College until his retirement in 1959. He is, however, beloved throughout the world as the creator of Middle-earth and author of such classic works as The Hobbit and The Lord of the Rings. He died on September 2, 1973, at the age of eighty-one.