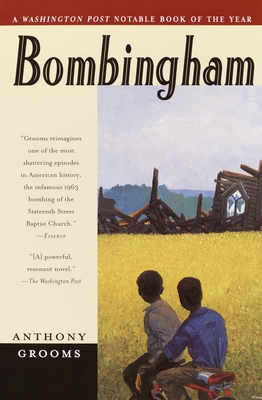 
Not On Our Shelves—Ships in 1-5 Days
In his barracks, Walter Burke is trying to write a letter to the parents of a fallen soldier, an Alabama man who died in a muddy rice paddy. But all he can think of is his childhood friend Lamar, the friend with whom he first experienced the fury of violence, on the streets of Birmingham, at the height of the Civil Rights Movement. The juxtaposition is so powerful—between war-torn Vietnam and terror-filled “Bombingham”—that he is drawn back to the summer that would see his transition from childish wonder at the world to his certain knowledge of his place in it.

Walter and Lamar were always aware of the terms of segregation—the horrendous rules and stifling reality. Their paper route never took them to the white areas of town. But that year, everything exploded. And so did Walter’s family. As the great movement swelled around them, the Burkes faced tremendous obstacles of their own. From a tortured past lingered questions of faith, and a terrible family crisis found its climax as the city did the same. In the streets of Birmingham, ordinary citizens risked their lives to change America. And for Walter, the war was just beginning.
Anthony Grooms was educated at the College of William and Mary and at George Mason University. He is the author of Ice Poems and Trouble No More: Stories and is the winner of the 1996 Lillian Smith Award. As a writer, teacher, and arts administrator, he has won awards from the National Endowment for the Arts, the Bread Loaf Writers’ Conference, and the City of Atlanta Bureau of Cultural Affairs. He is currently the professor of creative writing at Kennesaw State University in Georgia, and lives in Atlanta with his wife, Pamela B. Jackson.
“Grooms reimagines one of the most shattering episodes in American history, the infamous 1963 bombing of the Sixteenth Street Baptist Church.”
—Essence

“Bombingham is a considerable achievement . . . [that marks] the emergence of a brave and promising talent.”
—The Washington Post

“Too many of our younger generation know nothing about the struggle, the sacrifices, the dying of our people during those demonstrations of the fifties and the sixties. And older people too should be reminded, so that they’ll never forget. . . . [Bombingham] is about a subject and a time we should never forget.”
—ERNEST GAINES
Author of A Lesson Before Dying