The Power of One: A Novel (Paperback) 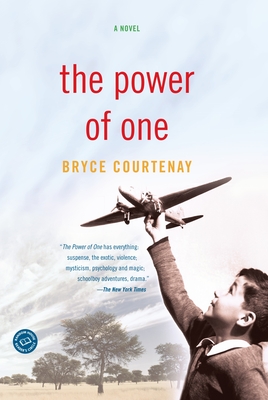 The Power of One: A Novel (Paperback)


In Stock—Click for Locations
“The Power of One has everything: suspense, the exotic, violence; mysticism, psychology and magic; schoolboy adventures, drama.”
–The New York Times

“Unabashedly uplifting . . . asserts forcefully what all of us would like to believe: that the individual, armed with the spirit of independence–‘the power of one’–can prevail.”
–Cleveland Plain Dealer


In 1939, as Hitler casts his enormous, cruel shadow across the world, the seeds of apartheid take root in South Africa. There, a boy called Peekay is born. His childhood is marked by humiliation and abandonment, yet he vows to survive and conceives heroic dreams–which are nothing compared to what life actually has in store for him. He embarks on an epic journey through a land of tribal superstition and modern prejudice where he will learn the power of words, the power to transform lives, and the power of one.


“Totally engrossing . . . [presents] the metamorphosis of a most remarkable young man and the almost spiritual influence he has on others . . . Peekay has both humor and a refreshingly earthy touch, and his adventures, at times, are hair-raising in their suspense.”
–Los Angeles Times Book Review

“Marvelous . . . It is the people of the sun-baked plains of Africa who tug at the heartstrings in this book. . . . [Bryce] Courtenay draws them all with a fierce and violent love.”
–The Washington Post Book World

“A compelling tale.”
–The Christian Science Monitor
Bryce Courtenay was born in South Africa, is an Australian, and has
lived in Sydney for the major part of his life. Visit him on the web at www.brycecourtenay.com.
“The Power of One has everything: suspense, the exotic, violence; mysticism, psychology and magic; schoolboy adventures, drama in the boxing ring.”
–The New York Times