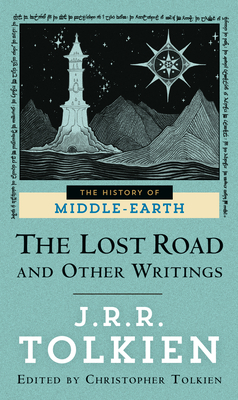 This is book number 5 in the The Histories of Middle-earth series.

As friends and fellow members of the literary circle known as The Inklings, J. R. R. Tolkien and C. S. Lewis embarked on a challenge. Lewis was to write on “space-travel” and Tolkien on “time-travel.” Lewis’s novel Out of the Silent Planet became the first book of a science fiction trilogy. Tolkien’s unfinished story “The Lost Road” chronicles the original destruction of Númenor, a pivotal event of the Second Age of Middle-earth.

In this intriguing volume, Christopher Tolkien traces the vivid history of Middle-earth, bringing the land—its topography and ever-clashing forces—to the state readers recognize from The Lord of the Rings. Entertaining and informative, The Lost Road and Other Writings shares fresh insights into the evolution of one of the world’s most enduring fantasies.
John Ronald Reuel Tolkien was born on January 3, 1892, in Bloemfontein, South Africa. After serving in World War I, he embarked upon a distinguished academic career and was recognized as one of the finest philologists in the world. He was a professor of Anglo-Saxon at Oxford, a fellow of Pembroke College, and a fellow of Merton College until his retirement in 1959. He is, however, beloved throughout the world as the creator of Middle-earth and author of such classic works as The Hobbit and The Lord of the Rings. He died on September 2, 1973, at the age of eighty-one.