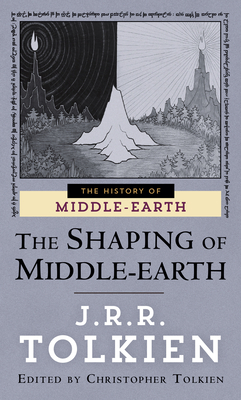 This is book number 4 in the The Histories of Middle-earth series.

Poems and prose, maps and chronologies, detours and diversions along the road to Middle-earth . . . Christopher Tolkien has gathered archival materials that his late father, J. R. R. Tolkien, used to create the world and the history behind his classic stories.

This fourth volume of The History of Middle-earth presents early versions of those first tales, from the creation myth to the fall of Morgoth. Writings include a chronology of the events in Beleriand, the first Silmarillion map, and the only known description of the physical nature of Middle-earth's universe. Detailed annotations highlight changes ranging from the spelling of Elvish names to pivotal emendations whose effects reach even to the war of the ring.

The Shaping of Middle-earth presents a solid framework by which to trace the development of the early lore of Middle-earth. It is a truly indispensable reference work for those familiar with the history of that endlessly beloved land—and fascinating reading for those just entering that world.
John Ronald Reuel Tolkien was born on January 3, 1892, in Bloemfontein, South Africa. After serving in World War I, he embarked upon a distinguished academic career and was recognized as one of the finest philologists in the world. He was a professor of Anglo-Saxon at Oxford, a fellow of Pembroke College, and a fellow of Merton College until his retirement in 1959. He is, however, beloved throughout the world as the creator of Middle-earth and author of such classic works as The Hobbit and The Lord of the Rings. He died on September 2, 1973, at the age of eighty-one.