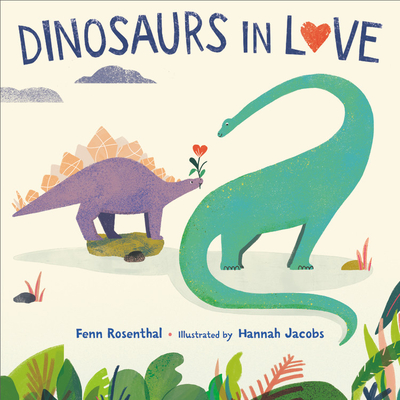 
In Stock—Click for Locations
“A surprising hit. Honestly, we were not prepared to be devastated by this song.” — The Today Show

Three-year-old Fenn Rosenthal’s viral song about love, longing, and loss has melted the hearts of tens of millions of people on Tiktok, Instagram, Spotify and even on the Jimmy Fallon Show. Now readers of all ages can enjoy Fenn's heartfelt, poignant lyrics again and again in this irresistible, sing-aloud picture book that includes exclusive extras!

Dinosaurs eat people, dinosaurs have a party, dinosaurs eat fruit and cucumber, but dinosaurs didn't say goodbye! This sweet and deceptively simple story features all-new illustrations from Hannah Jacobs (the animator of the viral music video) that expand on Fenn’s lyrics and illuminate tender moments from these beloved dinosaurs’ journey. Also features an interview with Fenn as well as a bonus letter from her father and singer-songwriter, Tom Rosenthal.

More praise for "Dinosaurs in Love":

"'Dinosaurs in Love' [leaves] adults reaching for tissues across the globe." -- People
"[This song is] breaking everyone's hearts." -- Buzzfeed News
"Giving us all the feels." -- BBC News
"[...] tapping into the universal experience of longing and loss in a few simple phrases." -- Rolling Stone
"Why am I crying?!" -- Popsugar

Dinosaurs in Love is the perfect gift to share with anyone you've ever fallen in love with, whether it be your friends, your family, or even a treat for yourself.
Fenn Rosenthal was born in 2017 and wrote "Dinosaurs in Love" when she was just three years old. In 2020, Fenn and her sister Bess released an EP of their songs in 2020 titled "They're Awake!" Fenn lives in London with her family.
Tom Rosenthal is a musician who is known for writing songs and crafting quirky videos that are bursting with feeling and showcase his love for music, people, and the world around him. He's released five albums to date and has also written soundtracks for short films and advertisements. He lives in London with his partner Bella Pace and their two daughters, Bess and Fenn.
Hannah Jacobs is a director, animator, and illustrator from London. She graduated with an MA in animation from the Royal College of Art. She has enjoyed much success with her films screening worldwide at festivals including official selection for SXSW, Tribeca, Annecy Festival, LIAF, MONSTRA, and Rooftop Films. Dinosaurs in Love is her first picture book.