Raise a Fist, Take a Knee: Race and the Illusion of Progress in Modern Sports (Hardcover) 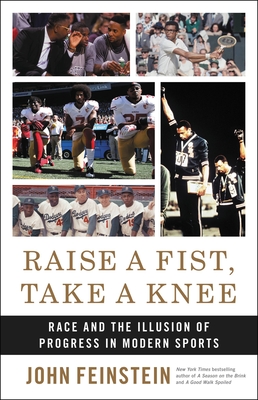 Raise a Fist, Take a Knee: Race and the Illusion of Progress in Modern Sports (Hardcover)


In Stock—Click for Locations
Based on dozens of shocking interviews with some of the most influential names in sports, this is the urgent and revelatory examination of racial inequality in professional athletics America has been waiting for.

Commentators, coaches, and fans alike have long touted the diverse rosters of leagues like the NFL and MLB as sterling examples of a post-racial America. Yet decades after Tommie Smith and John Carlos raised their fists in a display of Black power and pride, and years after Colin Kaepernick shocked the world by kneeling for the national anthem, the role Black athletes and coaches are expected to perform—both on and off the field—still can be determined as much by stereotype and old-fashion ideology as ability and performance.

Whether it’s the pre-game moments of resistance, the lack of diversity among coaching and managerial staff, or the consistent undervaluation of Black quarterbacks, racial politics impact every aspect of every sport being played—yet the gigantic salaries and glitzy lifestyles of pro athletes often disguise the ugly truths of how minority players are treated and discarded by their White bosses. John Feinstein crisscrossed the country to secure personal interviews with quarterbacks, coaches, and more, revealing the stories none of us have heard (but all of us should know).

“None of us are trying to make race an issue. Race IS an issue.” (From the Foreword by Doug Williams)
John Feinstein is the author of 45 books, including two #1 New York Times bestsellers, A Season on the Brink, and A Good Walk Spoiled. Fourteen of his books are Young Adult mysteries. One of them, Last Shot, won the Edgar Allan Poe Award for mystery writing in the Young Adult category. He is a member of five Halls of Fame and currently contributes to The Washington Post; Golf Digest, Golf World and the Black News Channel. He is also the TV color analyst for UMBC basketball.
“Absorbing…a comprehensive study of race and sports.”—The Washington Post

"Feinstein is the most successful sportswriter in America....He has the gift of re-creating events known to us all while infusing them with excitement, even suspense."—Jay Nordlinger, Wall Street Journal

"One of the best sportswriters alive."—Larry King, USA Today