The Spider (Under the Northern Sky #2) (Paperback) 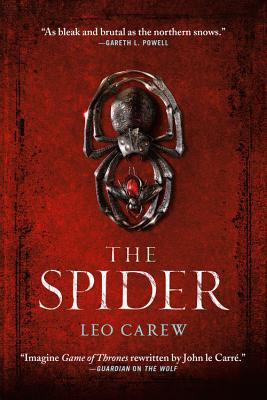 The Spider (Under the Northern Sky #2) (Paperback)


Not On Our Shelves—Ships in 1-5 Days
Control of the land under the Northern Sky rests in the balance as two fierce races collide in the sequel to The Wolf, a thrilling and savagely visceral epic fantasy from Leo Carew, an author who "will remind readers of George R. R. Martin, David Gemmell, or . . . Joe Abercrombie." (Booklist)
Roper, the Black Lord of the north, may have vanquished the Suthern army at the Battle of Harstathur. But the greatest threat to his people lies in the hands of more shadowy forces.
In the south, the disgraced Bellamus bides his time. Learning that the young Lord Roper is planning to invade the southern lands, Bellamus conspires with his Queen to unleash a weapon so deadly it could wipe out Roper's kind altogether.
And at a time when Roper needs his friends more than ever, treachery from within puts the lives of those he loves in mortal danger . . .
For more from Leo Carew, check out:
Under the Northern SkyThe WolfThe Spider
Leo Carew is a Cambridge graduate of Biological Anthropology, currently studying medicine. Apart from writing, his real passion is exploration, which led him to spend a year living in a tent in the High Arctic, where he trained and worked as an Arctic guide.
"Full of dark conspiracies, larger-than-life characters, and tense battles, Leo Carew has created a rousing cross between The Magnificent Seven and Game of Thrones."—Paul Hoffman on The Wolf

"As bleak and brutal as the northern snows, a new voice in epic fantasy"—Gareth L. Powell on The Wolf

"An action-packed and blood-splattered tour de force . . . . Carew is the real deal - an exciting new voice in fantasy."—Kirkus on The Wolf

"Gripping and ambitious . . . twisty in its political maneuverings, gritty in its battle descriptions, and rich with a sense of heroism and glory."—Publishers Weekly (starred review) on The Wolf

"The Wolf is a work of extraordinary imagination and perhaps the most captivating first novel I've ever read."—Michael Dobbs on The Wolf

"Carew's brisk and engaging narrative, with its mixture of gritty violence and political intrigue, will remind readers of George R. R. Martin, David Gemmell, or a less-bleak Joe Abercrombie."—Booklist on The Wolf

"Carew's worldbuilding skills are strong and his ability to infuse even the grittiest battle scene with emotion and drive is impressive."—RT Book Reviews on The Wolf