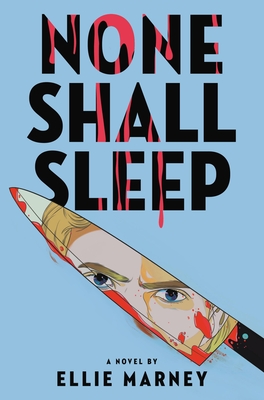 
Not On Our Shelves—Ships in 1-5 Days
The Silence of the Lambs meets Sadie in this riveting psychological thriller about two teenagers teaming up with the FBI to track down juvenile serial killers.

In 1982, two teenagers—serial killer survivor Emma Lewis and US Marshal candidate Travis Bell—are recruited by the FBI to interview convicted juvenile killers and provide insight and advice on cold cases. From the start, Emma and Travis develop a quick friendship, gaining information from juvenile murderers that even the FBI can't crack. But when the team is called in to give advice on an active case—a serial killer who exclusively hunts teenagers—things begin to unravel. Working against the clock, they must turn to one of the country's most notorious incarcerated murderers for help: teenage sociopath Simon Gutmunsson.

Despite Travis's objections, Emma becomes the conduit between Simon and the FBI team. But while Simon seems to be giving them the information they need to save lives, he's an expert manipulator playing a very long game...and he has his sights set on Emma.

Captivating, harrowing, and chilling, None Shall Sleep is an all-too-timely exploration of not only the monsters that live among us but also the monsters that live inside us.
Ellie Marney is an author of crime thrillers. Her titles include the Aurealis-winning None Shall Sleep, White Night, the Every series and the companion novel No Limits, and the Circus Hearts series. Her books are published in nine countries, and have been optioned for television. She’s spent a lifetime researching in mortuaries, talking to autopsy specialists, and asking former spies about how to make explosives from household items, and now she lives quite sedately in southeastern Australia with her family. Her next book, The Killing Code, an intense mystery about female codebreakers hunting a serial killer against a backdrop of 1940s wartime Washington DC, will be released in 2022.
"A YA Silence of the Lambs that blew me away with its daring premise, gripped me with its twists and turns, and kept me up all night until its stunning conclusion. Ellie Marney brings the serial killer thriller to YA with riveting suspense and sizzling style. Don't read this book in the dark!"—C.S. Pacat, USA Today bestselling author of Fence

"Marney (Circus of Arts) has created a thrilling cat-and-mouse story in this taut, Silence of the Lambs-like thriller.... Marney also skillfully creates engaging and complex characters as well as a budding romance that tenderly juxtaposes the overarching plot."—Publishers Weekly