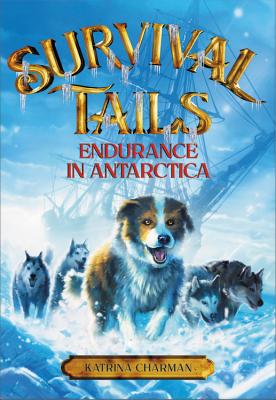 This is book number 2 in the Survival Tails series.

A group of sled dogs race to survive a perilous journey across Antarctica in the exhilarating second installment of Survival Tails, perfect for fans of the Ranger in Time and I Survived series!

Sled dog Samson wants nothing more than to be part of Ernest Shackleton's historic voyage to Antarctica. He wants to feel the snow under his paws and the wind on his face as he races across the ice fields, and most of all he wants to help his humans find eternal glory as they chart the continent. His fellow sled dog, Bummer, just wants to get through the voyage in one piece. Why would he want to face down a dangerous, icy wasteland when he could stay inside his kennel, warm and safe?

When their ship, the Endurance, becomes trapped in sea ice, leaving the dogs and men with no way home, their journey becomes not about personal glory, but about survival. Samson, Bummer, and the other dogs will have to put aside their differences and band together to rescue their humans...and themselves.

With engaging nonfiction back matter that delves into the fascinating true story behind the book, Survival Tails: Endurance in Antarctica is sure to keep readers entertained as the second entry in this series of action-packed animal adventures.
Katrina Charman lives in a small village in the middle of South East England with her husband and three daughters. Katrina has wanted to be a children's writer ever since she was eleven, when her school teacher set her class the task of writing an epilogue to Roald Dahl's Matilda. Her teacher thought her writing was good enough to send to Roald Dahl himself. Sadly, she never got a reply, but the experience ignited her love of reading and writing. She is the author of a number of forthcoming picture books and leveled readers.
Praise for Survival Tails: Endurance in Antarctica:"The story is filled with suspense and dramatic events that stretch credulity yet are indeed based in fact. This book lures its audience into the sled dogs' world of cracking ice, leopard seals, and killer whales, and leaves them with newfound respect for both the animals and the ferocity of the polar climate."—School Library Connection

Praise for Survival Tails: The Titanic:"...the perfect combination of adventure and history. Recommend this book to readers of Lauren Tarshis's "I Survived" tales."—School Library Journal

"This new take on the infamous tragedy of the Titanic is full of close calls and animal high jinks."—Kirkus Reviews