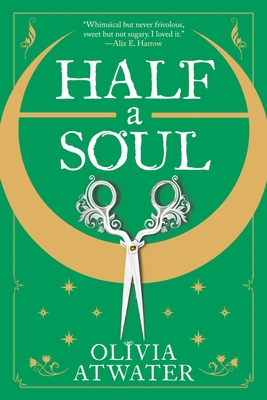 This is book number 1 in the Regency Faerie Tales series.

“Whimsical, witty, and brimming over with charm” (India Holton), Olivia Atwater’s delightful debut will transport you to a magical version of Regency England, where the only thing more meddlesome than a fairy is a marriage-minded mother!

It’s difficult to find a husband in Regency England when you’re a young lady with only half a soul.

Ever since she was cursed by a faerie, Theodora Ettings has had no sense of fear or embarrassment—an unfortunate condition that leaves her prone to accidental scandal. Dora hopes to be a quiet, sensible wallflower during the London Season—but when Elias Wilder, the handsome, peculiar, and utterly ill-mannered Lord Sorcier, discovers her condition, she is instead drawn into strange and dangerous faerie affairs.

If her reputation can survive both her curse and her sudden connection with the least-liked man in all high society, then she and her family may yet reclaim their normal place in the world. But the longer Dora spends with Elias, the more she begins to suspect that one may indeed fall in love even with only half a soul.

“Whimsical but never frivolous, sweet but not sugary. I loved it.” —Alix E. Harrow, author of The Once and Future Witches

Regency Faerie Tales
Half a Soul
Ten Thousand Stitches
Longshadow
Olivia Atwater writes whimsical historical fantasy with a hint of satire. She lives in Montreal, Quebec with her fantastic, prose-inspiring husband and her two cats. When she told her second-grade history teacher that she wanted to work with history someday, she is fairly certain this isn't what either party had in mind. She has been, at various times, a historical re-enactor, a professional witch at a metaphysical supply store, a web developer, and a vending machine repairperson.