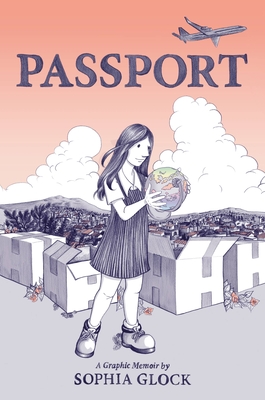 
On Our Shelves Now at:
An unforgettable graphic memoir by debut talent Sophia Glock reveals her discovery as a teenager that her parents are agents working for the CIA.
Young Sophia has lived in so many different countries, she can barely keep count. Stationed now with her family in Central America because of her parents' work, Sophia feels displaced as an American living abroad, when she has hardly spent any of her life in America.

Everything changes when she reads a letter she was never meant to see and uncovers her parents' secret. They are not who they say they are. They are working for the CIA. As Sophia tries to make sense of this news, and the web of lies surrounding her, she begins to question everything. The impact that this has on Sophia's emerging sense of self and understanding of the world makes for a page-turning exploration of lies and double lives.

In the hands of this extraordinary graphic storyteller, this astonishing true story bursts to life.
Sophia Glock is a cartoonist who lives and draws in Austin, Texas. She attended the College of William & Mary and the School of Visual Arts. Her work has been featured in the New Yorker, Buzzfeed, and Time Out New York. She talks to her sister every day.

"...a coming-of-age biographical story with a twist."

"A rare peek behind the curtain into life as the daughter of U.S. intelligence officers, this is a story full of secrets that expertly unfold one by one. Highly recommended for teen graphic novel collections."—School Library Journal

"Readers in search of a graphic novel that focuses on the path toward adulthood or teenagers trying claim their identity and independence away from the shadows of their parents will appreciate this offering."—Booklist