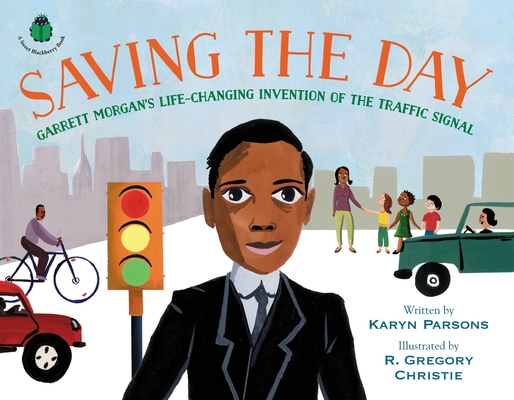 Before Garrett Morgan became a successful inventor and saved countless lives with his creations, he was a little boy with a head full of ideas on how to make life better for everyone.

At a tumultuous time filled with racism and discrimination, Garrett became a prominent business man and skilled inventor who produced the traffic signal, a gas mask, and others objects still used today.

This second book from the award-winning children's film series founded by Karyn Parsons, Sweet Blackberry, comes a little-known story about a man whose talent would be a gift to the world.
Karyn Parsons is best known for her role as Will Smith's cousin Hilary Banks on NBC's The Fresh Prince of Bel-Air. After leaving acting behind, Karyn has gone on to found and produce Sweet Blackberry, an award-winning series of children's animated films, to share stories about unsung black heroes in history, featuring narration from stars such as Alfre Woodard, Queen Latifah, and Chris Rock. The videos have been screened on HBO and Netflix, and enjoyed by schools and libraries across the country. She is the author of Flying Free: How Bessie Coleman's Dreams Took Flight and How High the Moon. Karyn lives with her family in New York City.

R. Gregory Christie is a Caldecott Honor Winner, a six-time recipient of a Coretta Scott King Award Honor, a two-time winner of the New York Times 10 Best Illustrated Children's Books of the Year (2000 and 2002), a winner of the Theodor Seuss Geisel Award for illustration, and a recipient of the NAACP's Image Award. He is the illustrator on Karyn Parson's Sweet Blackberry films, and its picture book Flying Free: How Bessie Coleman's Dreams Took Flight. When he's not illustrating books, he operates GAS-ART GIFTS, a children's bookstore with autographed copies in Decatur, Georgia.

* “The story of Morgan’s accomplishments is entertaining and informative. A fine contribution to African American creative nonfiction for young readers.”

Praise for Flying Free: How Bessie Coleman's Dreams Took Flight:
“A nice biography of a trailblazer who broke a glass ceiling in aviation for women, and for people of color.”