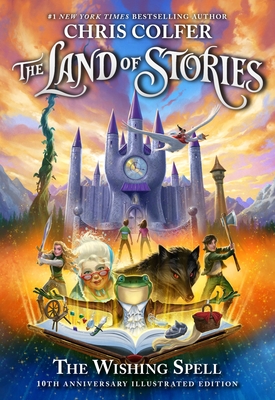 Alex and Conner Bailey's world is about to change, in this fast-paced adventure that uniquely combines our modern day world with the enchanting realm of classic fairy tales.

The Land of Stories tells the tale of twins Alex and Conner. Through the mysterious powers of a cherished book of stories, they leave their world behind and find themselves in a foreign land full of wonder and magic where they come face-to-face with fairy tale characters they grew up reading about.

But after a series of encounters with witches, wolves, goblins, and trolls alike, getting back home is going to be harder than they thought.


This special ten-year anniversary edition of the book that launched the beloved worldwide phenomenon includes a personal note from the author and over 20 new full-color, full-page illustrations from series illustrator Brandon Dorman, making this the perfect gift for both new and returning fans!

Chris Colfer is a #1 New York Times bestselling author and Golden Globe-winning actor. He was honored as a member of the TIME 100, Time magazine’s annual list of the one hundred most influential people in the world, and his books include Struck By Lightning: The Carson Phillips Journal, Stranger Than Fanfiction, the books in The Land of Stories series: The Wishing Spell, The Enchantress Returns, A Grimm Warning, Beyond the Kingdoms, An Author’s Odyssey, and Worlds Collide, the companion books A Treasury of Classic Fairy Tales, The Mother Goose Diaries, Queen Red Riding Hood’s Guide to Royalty, The Curvy Tree, Trollbella Throws a Party, and Goldilocks: Wanted Dead or Alive, and the books in the A Tale of Magic… series: A Tale of Magic…, A Tale of Witchcraft…, and A Tale of Sorcery…. He invites you to visit him online at thelandofstories.com or on Instagram and Twitter @chriscolfer.

"It will hit big with its combination of earnestness and playful poise."—The New York Times Book Review

"In The Land of Stories, Colfer showcases his talent for crafting fancifully imaginative plots and multidimensional characters."—Los Angeles Times

"It's hard not to love a book dedicated to the Glee star's grandmother...Colfer gets off many good lines [and] the nifty ending ties the plot's multiple strands up while leaving room for further fairy tale adventures."—Publishers Weekly