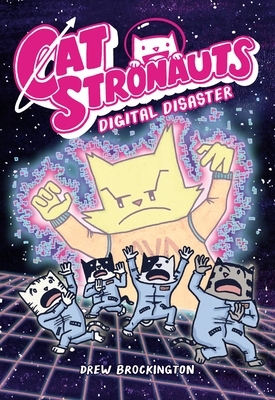 This is book number 6 in the CatStronauts series.

In the sixth CatStronauts graphic novel, the elite team gets invited to test the first-ever space hotel! With a highly sophisticated Artificial Intelligence running the hotel and attending to the CatStronauts' every need, what could possibly go wrong?

Darby Fuzzelton, the world's richest cat, is determined to open the first-ever space hotel! Her first guests? The elite CatStronauts along with a few kittens who were top of their class at Space Camp. Their job? To prove that her space hotel is safe to the public.
When the cats and kittens arrive, they're greeted by AVA, an advanced Artificial Intelligence system programmed to handle countless hotel operations. Upon seeing Cat-Stro-Bot and his ability to go ANYWHERE, AVA becomes obsessed with gaining her own freedom. With AVA distracted, all the hotel systems go on the fritz! Will the CatStronauts escape this hotel of horror?
In this full-color graphic novel, author/illustrator Drew Brockington pushes the CatStronauts team further than ever, but there's still lots of humor, teamwork, and tuna fish by the ton!
Drew Brockington has flown a Space Shuttle, repaired the International Space Station, and served in Mission Control; all during a week at Space Camp. CatStronauts is his first series. He lives with his family in Minneapolis.
Praise for CatStronauts:An IndieBound Bestseller
An Amazon Best Book for April 2017A 2018 TLA Little Maverick Graphic Novel Reading List Book"With its appealing blend of cuteness, substance, and humor, this should have readers over the moon."—Kirkus Reviews

"The engagingly lighthearted drama and positive resolutions, and the expressive characters, who are as adorable as they are adventurous, provide...fun purchases that will do well on their own or paired with heavier nonfiction titles on history or the environment."
—School Library Journal

"There's lots of enthusiasm for graphic novels for this age range, and the CatStronauts deserve a spot."—BCCB