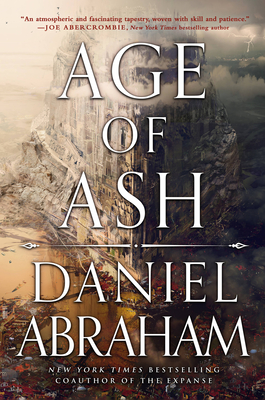 This is book number 1 in the The Kithamar Trilogy series.

From a Hugo award-winningNew York Timesbestselling author comes a "fascinating" epic fantasy trilogy that unfolds within the walls of a single great city where every story matters (Joe Abercrombie)—and the fate of the city is woven from them all.

Kithamar is a center of trade and wealth, an ancient city with a long, bloody history where countless thousands live and their stories unfold.

When her brother is murdered, a petty thief from the slums of Longhill sets out to discover who killed him and why.  But the more she discovers about him, the more she learns about herself, and the truths she finds are more dangerous than knives.

Swept up in an intrigue as deep as the roots of Kithamar, where the secrets of the lowest born can sometimes topple thrones, the story Alys chooses will have the power to change everything.

For more from Daniel Abraham, check out:

The Dagger and the Coin
The Dragon's Path
The King's Blood
The Tyrant's Law
The Widow's House
The Spider's War
Daniel Abraham is the author of the critically-acclaimed Long Price Quartet and The Dagger and the Coinseries. He has been nominated for the Nebula and World Fantasy awards, and won the Hugo award and International Horror Guild award. He also writes as James S. A. Corey (with Ty Franck) and MLN Hanover. He lives in New Mexico.
“An atmospheric and fascinating tapestry, woven with skill and patience.”—Joe Abercrombie, New York Times bestselling author of A Little Hatred

"Abraham is so good at evoking place and tying it inextricably to the people who occupy it . . . An almost perfect book in and of itself. I highly recommend it."—Fantasy & Science Fiction

“This new work bears the hallmark of a great Abraham work.”—Kirkus

“Age of Ash’s Kithamar is a spectacular creation, a city brought to life by dense, intricate worldbuilding and subtle magic. Fans of Scott Lynch or Robert Jackson Bennett will enjoy this one.”—Django Wexler, author of Ashes of the Sun

“Abraham builds this world with all the confident craftsmanship you’d expect from an author with his pedigree . . . . Kithamar is in the hands of a pro.”—SFX

"Everything I look for in a fantasy."—George R.R. Martin on The Dragon's Path

"Abraham builds on The Dragon's Path to create and sustain a rich, satisfyingly complex epic fantasy."—Publishers Weekly on The King's Blood

"Prepare to be shocked, startled, and entertained."—Locus on The Dragon's Path

"It's as if Clint Eastwood went to Narnia...A pleasure for Abraham's legion of fans."—Kirkus on The Dragon's Path

"This smart, absorbing, fascinating military fantasy, exciting and genuinely suspenseful, will keep readers on their toes."—Publishers Weekly (Starred Review) on The Tyrant's Law