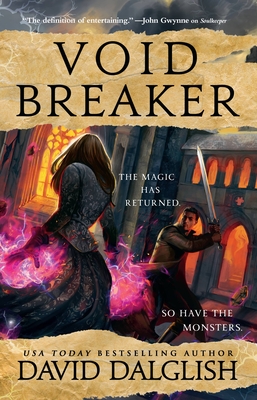 
Not On Our Shelves—Ships in 1-5 Days
When magical creatures storm the gates of Londheim and claim it for themselves, Devin, a warrior priest, must decide who the true monsters are in the final book of the USA Today bestselling author's epic fantasy trilogy.

Monsters have retaken the capital city of Londheim and claimed it for themselves. Humanity, fearful of being pushed out for good, has reacted with violence and destruction, and peace between the two races seems all but impossible. Devin will need to bring all his skills to bear in order to find a solution. But the greatest threat to humanity's safety may well be closer than he expects. Because his sister is the most powerful priestess the world has ever seen . . . and she's fighting for the monsters.

The fate of all races, human and magical, rests in their hands, and the only person standing in their way is each other.
David Dalglish currently lives in rural Missouri with his wife Samantha, and daughters Morgan, Katherine, and Alyssa. He graduated from Missouri Southern State University in 2006 with a degree in Mathematics and currently spends his free time dying for the umpteenth time in Dark Souls.
Dalglish sticks the landing with his final Keepers fantasy ... This is a worthy finale.—Publishers Weekly

Dark, gory, yet still inspiring... . Dalglish’s approach to this third book in the series (after Ravencaller) keeps the returning characters fresh, relevant, and impactful in their necessary roles to both uplift and restrict the responsibilities of the Chainbreaker. —Library Journal

"A dark and lush epic fantasy brimming with magical creatures and terrifying evil....Dalglish's world building is subtle and fluid, and he weaves the history, magical workings, and governance of his world within the conversations and camaraderie of his characters. Readers of George R. R. Martin and Patrick Rothfuss will find much to enjoy here."—Booklist on Soulkeeper

"With strong world building, imaginative monsters, and a capable system of magic, this series will please readers who enjoy dark epic fantasy with engaging characters."—Booklist on Ravencaller

"Fans will love the second installment of this dark fantasy about very human characters beset by inhuman dangers."—Kirkus on Ravencaller

"Dalglish has created a rich and intriguing world."—Kirkus on Soulkeeper

"Soulkeeper is a fast-paced, page-turning ride with a great, likeable main character in Devin Eveson. It's the definition of entertaining"—John Gwynne, author of Malice on Soulkeeper