Leave It to Abigail!: The Revolutionary Life of Abigail Adams (Hardcover) 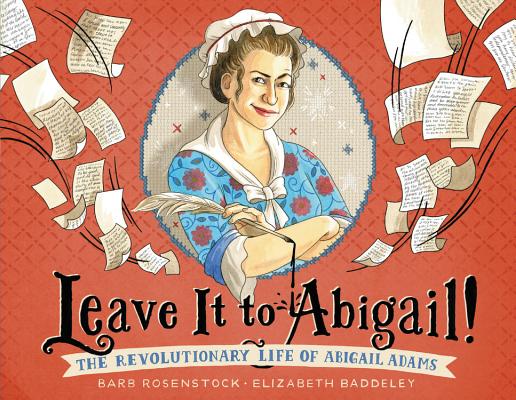 Leave It to Abigail!: The Revolutionary Life of Abigail Adams (Hardcover)


Not On Our Shelves—Ships in 1-5 Days
In this inspiring tribute, award-winning author Barb Rosenstock and New York Times bestselling artist Elizabeth Baddeley tell the true story of one of America's greatest founding mothers: Abigail Adams.

Everyone knew Abigail was different.

Instead of keeping quiet, she blurted out questions. Instead of settling down with a wealthy minister, she married a poor country lawyer named John Adams. Instead of running from the Revolutionary War, she managed a farm and fed hungry soldiers. Instead of leaving the governing to men, she insisted they "Remember the Ladies." Instead of fearing Europe's kings and queens, she boldly crossed the sea to represent her new country. And when John become President of the United States, Abigail became First Lady, and a powerful advisor.

Leave it to Abigail--an extraordinary woman who surprised the world.
Barb Rosenstock is the author of the Caldecott Honor book The Noisy Paintbox, Otis and Will Discover the Deep, Blue Grass Boy, The Secret Kingdom, and Vincent Can't Sleep, among several others that have received numerous accolades and starred reviews. She lives in Illinois.
Elizabeth Baddeley is an award-winning and New York Times bestselling illustrator of such titles as I Dissent, The Cat Who Lived With Anne Frank, An Inconvenient Alphabet, A Woman in the House (and Senate), Women Who Broke the Rules, and The Good Fight, among others. She lives in Missouri.
Praise for Leave It to Abigail!:* "Informative.... Appealing.... Highly recommended."
—School Library Journal, starred review

"An engaging and illuminating depiction of a woman whose story deserves to be known widely."—Kirkus Reviews

"This lively biography chronicles some of the ways Abigail continued to surprise her contemporaries with her new ideas, strong voice, and constant courage."
—School Library Connection

"Through lively text, the author showcases the ways Adams was ahead of her time. The refrain, 'Leave it to Abigail,' adds a rhythm to the narrative, making thisa good choice to read aloud.Baddeley (I Dissent, 2016) adds humor and panache with her pencil-and-ink illustrations, adding an authentic feel through lovely cross-stitch finishing touches."
—Booklist