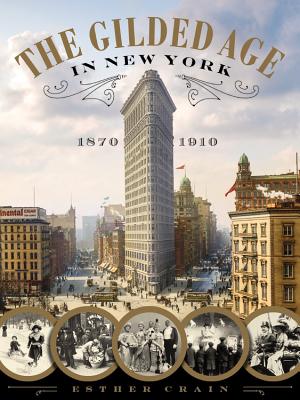 
Not On Our Shelves—Ships in 1-5 Days
The drama, expansion, mansions and wealth of New York City's transformative Gilded Age era, from 1870 to 1910, captured in a magnificently illustrated hardcover.

In forty short years, New York City suddenly became a city of skyscrapers, subways, streetlights, and Central Park, as well as sprawling bridges that connected the once-distant boroughs. In Manhattan, more than a million poor immigrants crammed into tenements, while the half of the millionaires in the entire country lined Fifth Avenue with their opulent mansions.

The Gilded Age in New York captures what is was like to live in Gotham then, to be a daily witness to the city's rapid evolution.

The Gilded Age in New York is a rare illustrated look at this amazing time in both the city and the country as a whole. Author Esther Crain, the go-to authority on the era, weaves first-hand accounts and fascinating details into a vivid tapestry of American society at the turn of the century.

Praise for New-York Historical Society New York City in 3D In The Gilded Age, also by Esther Crain:
"Vividly captures the transformation from cityscape of horse carriages and gas lamps 'bursting with beauty, power and possibilities' as it staggered into a skyscraping Imperial City." -- Sam Roberts, The New York Times

"Get a glimpse of Edith Wharton's world." -- Entertainment Weekly Must List
"What better way to revisit this rich period . . ?" -- Library Journal
Esther Crain, a native New Yorker, wrote New-York Historical Society's New York City in 3D in the Gilded Age. In 2008, she launched Ephemeral New York, a website that chronicles the city's past, which was been profiled in numerous publications, including the New York Times, New York Daily News, and New York Post.
"A beguiling, lavishly illustrated book that. . . epitomizes what Ms. Crain calls the city's incredible energy and sense of its own greatness and destiny."—Sam Roberts, The New York Times