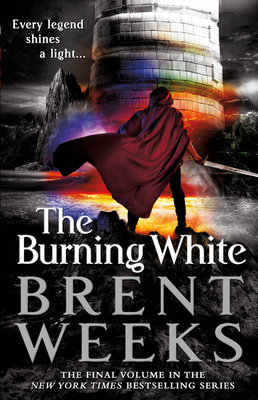 This is book number 5 in the Lightbringer series.

In this stunning conclusion to the epic New York Timesbestselling Lightbringer series, kingdoms clash as Kip struggles to escape his family's shadow in order to protect the land and people he loves.
Gavin Guile, once the most powerful man the world had ever seen, has been laid low. He's lost his magic, and now he is on a suicide mission. Failure will condemn the woman he loves. Success will condemn his entire empire.
As the White King springs his great traps and the Chromeria itself is threatened by treason and siege, Kip Guile must gather his forces, rally his allies, and scramble to return for one impossible final stand.
The long-awaited epic conclusion of Brent Weeks's New York Times bestselling Lightbringer series.
Lightbringer
The Black Prism
The Blinding Knife
The Broken Eye
The Blood MirrorThe Burning White
For more from Brent Weeks, check out:
Night Angel
The Way of Shadows
Shadow's Edge
Beyond the Shadows

The Night Angel Trilogy: 10th Anniversary EditionNight Angel: The Complete Trilogy (omnibus)
Perfect Shadow: A Night Angel Novella
The Way of Shadows: The Graphic Novel
Brent Weeks was born and raised in Montana. He wrote on bar napkins and lesson plans before landing his dream job years and thousands of pages later. Brent lives in Oregon with his wife, Kristi, and their daughters. Find out more about the author at www.brentweeks.com or on Twitter @brentweeks.
"Bestseller Weeks keeps the pot simmering with many secrets revealed and much verbal sparring... Weeks deftly moves the pieces around his chessboard, snapping them with assured feeling onto their new squares in preparation for a climactic confrontation."—Publishers Weekly on The Blood Mirror

"Brent Weeks has a style and immediacy of detail that pulls the reader relentlessly into his story. He doesn't allow you to look away."—Robin Hobb on The Black Prism

"The Lightbringer series is great fun. Nobody does breakneck pacing and amazingly executed plot twists like Brent Weeks."—Brian McClellan, author of Promise of Blood on The Black Prism

"His plot feels like an orchestrated chess match between genius grandmasters."—Publishers Weekly on The Broken Eye

"Brent Weeks is so good it's starting to tick me off."—Peter V. Brett, New York Times bestselling author of The Desert Spear on The Night Angel Trilogy

"The Blinding Knife is a wonderful work of high fantasy with engaging characters facing the perfect antagonists, set in a creatively-wrought and increasingly chaotic world brimful of imaginative magic and interesting politics. Weeks holds fast to the traditions of his genre while adding a compelling new flavor."—The Ranting Dragon on The Blinding Knife

"One of the best epic fantasies I've ever read."—Staffer's Book Review on The Blinding Knife

"Weeks manages to ring new tunes on...old bells, letting a deep background slowly reveal its secrets and presenting his characters in a realistically flawed and human way."—Publishers Weekly on The Black Prism

"Weeks has written an epic fantasy unlike any of its contemporaries. It is a truly visionary and original work, and has set the bar high for others in its subgenre."—graspingforthewind.com on The Black Prism