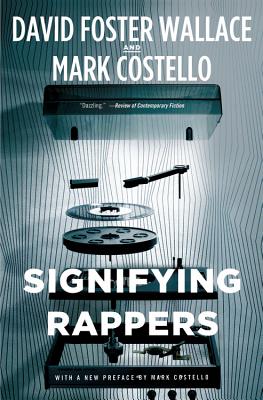 Living together in Cambridge in 1989, David Foster Wallace and longtime friend Mark Costello discovered that they shared "an uncomfortable, somewhat furtive, and distinctively white enthusiasm for a certain music called rap/hip-hop."

The book they wrote together, set against the legendary Boston music scene, mapped the bipolarities of rap and pop, rebellion and acceptance, glitz and gangsterdom. Signifying Rappers issued a fan's challenge to the giants of rock writing, Greil Marcus, Robert Palmer, and Lester Bangs: Could the new street beats of 1989 set us free, as rock had always promised?

Back in print at last, Signifying Rappers is a rare record of a city and a summer by two great thinkers, writers, and friends. With a new foreword by Mark Costello on his experience writing with David Foster Wallace, this rerelease cannot be missed.
David Foster Wallace was born in Ithaca, New York, in 1962 and raised in Illinois, where he was a regionally ranked junior tennis player. He received bachelor of arts degrees in philosophy and English from Amherst College and wrote what would become his first novel, The Broom of the System, as his senior English thesis. He received a masters of fine arts from University of Arizona in 1987 and briefly pursued graduate work in philosophy at Harvard University. His second novel, Infinite Jest, was published in 1996.

Wallace taught creative writing at Emerson College, Illinois State University, and Pomona College, and published the story collections Girl with Curious Hair, Brief Interviews with Hideous Men, Oblivion, the essay collections A Supposedly Fun Thing I'll Never Do Again, and Consider the Lobster. He was awarded the MacArthur Fellowship, a Lannan Literary Award, and a Whiting Writers' Award, and was appointed to the Usage Panel for The American Heritage Dictionary of the English Language. He died in 2008. His last novel, The Pale King, was published in 2011.
ACCLAIM FOR DAVID FOSTER WALLACE:

"The Best Mind of His Generation"—A.O. Scott, The New York Times

"A prose magician, Mr. Wallace was capable of writing...about subjects from tennis to politics to lobsters, from the horrors of drug withdrawal to the small terrors of life aboard a luxury cruise ship, with humor and fervor and verve. At his best he could write funny, write sad, write sardonic and write serious. He could map the infinite and infinitesimal, the mythic and mundane. He could conjure up an absurd future...while conveying the inroads the absurd has already made in a country where old television shows are a national touchstone and asinine advertisements wallpaper our lives."—Michiko Kakutani, The New York Times

"One of the most influential writers of his generation."—Timothy Williams, The New York Times

"Two educated white guys do the right thing by scoping out 'The Meaning of Rap' without pretending to know everything about it...Signifying Rappers is both a cogent explication of rap and a cutting, revealing parody of overinflated pseudointellectual rap criticism."—Seattle Weekly