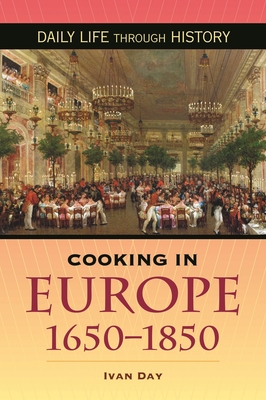 From the Baroque Era to the Victorian Era, 1650-1850, unprecedented changes took place in the food ways and dining habits of European society. This daily life aspect of history comes alive for students and food enthusiasts as they read and try out these recipes, most translated into English for the first time. There are nearly 200 recipes, organized overall by the mini-periods of the Baroque and Rococo Era, the Reign of Louis XV to the French Revolution, and the reign of Napoleon to the Victorian Era. Author Ivan Day, a renowned food historian who specializes in meticulous recreation of these amazing dishes for museum exhibitions, makes them accessible with clear explanations of techniques and unusual ingredients. Recipes include examples from France, Italy, England, Austria, Germany, Holland, Portugal, Spain, and Scotland, from the simple Salad of Pomegranate from La Varenne Careme's 1651 cookbook to the elaborate Boar's Head in Galantine of Careme's 1833 cookbook. This unique cookbook is a culinary treasure trove to complement all European History library collections.

As Day shows in his narrative and recipes, the principal theme in the story of food during the two centuries is the rapid spread of French fine cooking throughout Europe and its gradual percolation down the social scale. However, despite the domination of French cuisine at higher levels, most nations managed to cling proudly to their own indigenous traditions. A lively introduction explains the dramatic shift in culinary taste led by the exuberant creativity of French cooks. Cookbooks started to emerge from the Paris printing presses after a hundred years of silence. Numerous innovations completely transformed French cuisine and swept away all remnants of lingering medieval taste. There were new efficient cooking techniques for the kitchens of powerful and wealthy. For all, there were new ingredients from New World and new cooking mediums such as the mechanical spit and roasting ranges that made cooking cleaner and less back breaking. The recipes, each with a short explanation, are organized by type of dish. Categories include salads and cold dishes; soups; meat; poultry; fish and seafood; vegetables and fungi; eggs and dairy; sauces; savory pastries; starches, pastas, and legumes; breads and cakes; sweet pastries and puddings; fruit, nuts, and flower preserves; sweets and confections; jellies and ices; and drinks. Occasional sidebars offer period menus of, for example, elaborate feasts. A glossary and an appendix listing suppliers of equipment and ingredients are added features.

IVAN DAY is a renowned food historian, museums and exhibitions consultant, and historic food educator, cook, and broadcaster in Cumbria, England. His 17th-century farmhouse houses his collection of antique kitchen artifacts and is the setting for courses offered on period food. Day's amazing work and passion are shown on his spectacular website, www.historicfood.com.