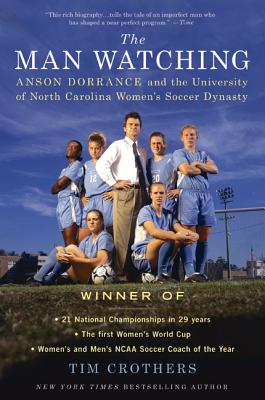 As coach of the University of North Carolina women's soccer team, Anson Dorrance has won more than 90 percent of his games, groomed far more All-Americans, and captured more NCAA championships than any other coach in the sport ten times over. Author Tim Crothers spent four years interviewing Dorrance and Tar Heels players from every era, along with players and coaches from rival college programs, to create the most comprehensive, intimate, and unfiltered look ever inside the most prolific dynasty in college athletics. Updated to include the story of the Tar Heels's 2008 and 2009 NCAA championships, The Man Watching is the authorized biography of a fascinating man and the more than 200 young women he inspired to believe that anything is possible.

Tim Crothers is a former senior writer at Sports Illustrated who graduated from the University of North Carolina at Chapel Hill in 1986 and has lectured in the university's journalism department for the last seven years. He is the coauthor of the New York Times bestseller Hard Work: A Life On and Off the Court with Roy Williams.

“Crothers spent four all-access years with Dorrance and his players for this rich biography and tells the tale of an imperfect man who has shaped a near perfect program.” —Time

“Dorrance is a mesmerizing orator, and Crothers reveals the stark emotional power that Dorrance wields over his teams.” —Sports Illustrated

“Anson Dorrance's story is one of the most fascinating to ever come along in American sports. And Tim Crothers is the perfect writer to tell it.” —Rick Reilly, ESPN

“A great read for anybody aspiring to be the best in sports, business, or whatever their chosen field.” —Dr. Stephen Covey, bestselling author of The 7 Habits of Highly Effective People

“I've known Anson for almost fourty years, but this book details so much that I never knew about the man behind Carolina's remarkable soccer program. Anyone who coaches, teaches or has a positive influence on young people can learn from someone who is one of the greatest leaders to ever coach any sport.” —Roy Williams, University of North Carolina national champion men’s basketball coach

“Anson has built a dynasty that has no comparison and Tim Crothers has written a book that is equally extraordinary.” —Dean Smith, Hall of Fame basketball coach

“A rare look behind the scenes at everything it takes to coach and play a sport at the highest level, but to me it's really more about what Anson has done to coach all of us so well in life.” —Mia Hamm, two-time Women’s World Cup championship team member