The Swing Vote: The Untapped Power of Independents (Hardcover) 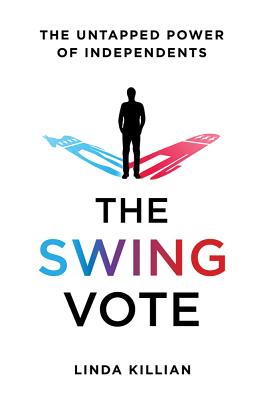 The Swing Vote: The Untapped Power of Independents (Hardcover)

As our country’s politicians engage in bitter partisan battles, focused on protecting their own jobs but not on doing the nation’s business, and political pundits shout louder and shriller to improve their ratings, it’s no wonder that Americans have little faith in their government. But is America as divided as the politicians and talking heads would have us  believe? Do half of Americans stand on the right and the other half on the left with a no-man’s-land between them?

Hardly. Forty percent of all American voters are Independents who occupy the ample political and ideological space in the center. These Americans are anything but divided, and they’re being ignored. These Independents make up the largest voting bloc in the nation and have determined the outcome of every election since World War II. Every year their numbers grow, as does the unconscionable disconnect between them and the officials who are supposed to represent them.

The Swing Vote: The Untapped Power of Independents tells the story of how our polarized political system is not only misrepresenting America but failing it. Linda Killian looks beyond the polls and the headlines and talks with the frustrated citizens who are raising the alarm about the acute bi-polarity, special interest-influence, and gridlock in Congress, asking why Obama’s postpartisan presidency is anything but, and demanding realism, honest negotiation, and a sense of responsibility from their elected officials.

Killian paints a vivid portrait of the swing voters around the country and presents a new model that reveals who they are and what they want from their government and elected officials. She also offers a way forward, including solutions for fixing our broken political system. This is not only a timely shot across the bows of both parties but an impassioned call to Independents to bring America back into balance.

Linda Killian is a journalist and senior scholar at the Woodrow Wilson International Center for Scholars. She has been a columnist for "Politico," U.S. News & World Report.com, and Politics Daily. She has also written for "The Washington Post," "The New Republic," and "The Weekly Standard," among other national publications. Her previous book was "The Freshmen: What Happened to the Republican Revolution?" She lives in Washington, D.C.

Praise for The Swing Vote:

“The Swing Vote has useful observations…. [Linda Killian] traveled around the country interviewing hundreds of voters who are disaffected. There are lessons to be learned from her reporting.”
--The New York Review of Books


“A useful look at the current makeup and mood of America’s voters.”
--Kirkus Reviews on The Swing Vote

“Linda Killian helps us understand who the swing voters who decide elections are and what they are looking for. Killian's analysis provides a valuable guide on harnessing their collective energy into a new way of thinking about politics.”
---Eleanor Clift, contributor Newsweek and Daily Beast

“Linda Killian has written a lively and insightful book about the current state of American politics, melding the best skills of a journalist, a social scientist, a pollster, and a passionate citizen.…With Congress’s disapproval rating at an all-time high, and a ‘plague on both houses’ sentiment exploding in the country, it is hard to imagine a more timely book.”
---Norman J. Ornstein, author of The Broken Branch: How Congress Is Failing America and How to Get It Back on Track

“Linda Killian does a great job of not only examining the importance and historic role of those Independent and moderate swing voters who live between the partisan and ideological forty-yard lines, but she examines their mind-sets as well. What makes swing voters tick, what swings them and why?  An understanding of swing voters leads to an understanding of the volatility and the turbulence that drove the 2006, 2008, and 2010 elections and will likely drive 2012 as well.”
---Charlie Cook, editor and publisher of The Cook Political Report and political analyst for NBC News

Praise for The Freshmen: What Happened to the Republican Revolution?

“Linda Killian’s new and terrific book…is a strong, well-researched, and well-credited document on the failure of the seventy-three Republican freshmen in the class of ’94.”
---USA Today

“Killian’s prodigious research is evident on every information-packed page.”
---The Washington Post