Brown Bear, Brown Bear, What Do You See? Slide and Find (Brown Bear and Friends) (Board book) 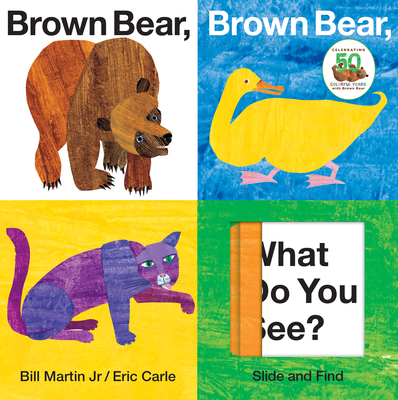 Brown Bear, Brown Bear, What Do You See? Slide and Find (Brown Bear and Friends) (Board book)

Eric Carle's familiar illustrations of brown bear, red bird, yellow duck and the other endearing animals from his classic creation parade across the pages of this great Slide and Find interactive board book.

As each page is turned, a new animal and its color are introduced, accompanied by Bill Martin Jr.'s singsong, rhyming question-and-response text to read aloud or listen to. There are sliding doors throughout the book, which children will just love to open, so they can discover what the next animal in this engaging story will be.

Praise for this beloved children's classic: