Everything Ravaged, Everything Burned: Stories (Paperback) 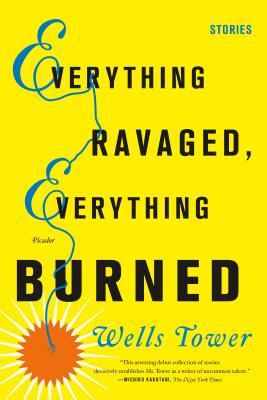 Everything Ravaged, Everything Burned: Stories (Paperback)

Viking marauders descend on a much-plundered island, hoping some mayhem will shake off the winter blahs. A man is booted out of his home after his wife discovers that the print of a bare foot on the inside of his car's windshield doesn't match her own. Teenage cousins, drugged by summer, meet with a reckoning in the woods. A boy runs off to the carnival after his stepfather bites him in a brawl. Wells Tower's version of America is touched with the seamy splendor of the dropout, the misfit: failed inventors, boozy dreamers, hapless fathers, wayward sons. With electric prose and savage wit, Everything Ravaged, Everything Burned is a profound new collection of stories.

Wells Tower is the author of the short story collection Everything Ravaged, Everything Burned. His short stories and journalism have appeared in The New Yorker, Harper’s Magazine, McSweeney’s, The Paris Review, The Anchor Book of New American Short Stories, The Washington Post Magazine, and elsewhere. He received two Pushcart Prizes and the Plimpton Prize from The Paris Review. He divides his time between Chapel Hill, North Carolina and Brooklyn, New York.

“Artful and funny and empathetic. His fictional universe is a perfectly balanced little biosphere of violence and mercy, aggression and nurturing.” —Sam Anderson, New York magazine

“Tower writes about raggedy men, neglected boys, and quarrelsome Vikings who are down on their luck (if they ever had any). But the stories are very funny, and surprising, and possess a rugged beauty.” —Vendela Vida, Vanity Fair

“It sometimes feels as if there's nothing Tower can't render in arresting fashion. His prose is a welcome reminder that the first job of the fiction writer is to introduce the reader to worlds both new and familiar in ways they wouldn't have arrived at on their own.” —Jim Ruland, Los Angeles Times

“Wells Tower's stories are written, thrillingly, in authentic American vernacular--violent, funny, bleak, and beautiful. You need to read them, now.” —Michael Chabon, author of The Yiddish Policemen's Union and The Amazing Adventures of Kavalier & Clay