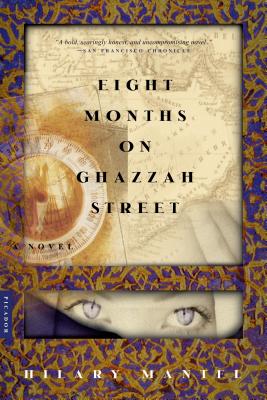 When Frances Shore moves to Saudi Arabia, she settles in a nondescript sublet, sure that common sense and an open mind will serve her well with her Muslim neighbors. But in the dim, airless flat, Frances spends lonely days writing in her diary, hearing the sounds of sobs through the pipes from the floor above, and seeing the flitting shadows of men on the stairwell. It's all in her imagination, she's told by her neighbors; the upstairs flat is empty, no one uses the roof. But Frances knows otherwise, and day by day, her sense of foreboding grows even as her sense of herself begins to disintegrate.

Hilary Mantel is the two-time winner of the Man Booker Prize for her best-selling novels, Wolf Hall, and its sequel, Bring Up the Bodies—an unprecedented achievement. The Royal Shakespeare Company adapted Wolf Hall and Bring Up the Bodies for the stage to colossal critical acclaim, and the BBC/Masterpiece six-part adaption of the novels aired in 2015.

The author of fourteen books, she is currently at work on the third installment of the Thomas Cromwell Trilogy.

“A heady spice of significance cleverly spiced with an aura of lurking menace.” —The New York Times Book Review

“A violent conspiracy tale with a nuanced psychological portrait of a woman learning to trust her own eyes and ears.” —Entertainment Weekly

“A tautly written tale of suspense that makes brilliant use of monotony and claustrophobia to heighten the heroine's growing sense of danger.” —The Washington Post Book World

“[A] blend of dark and light, comedy and tragedy, heart-in-the-mouth narrative and slow-working analysis of the human condition.” —Los Angeles Times